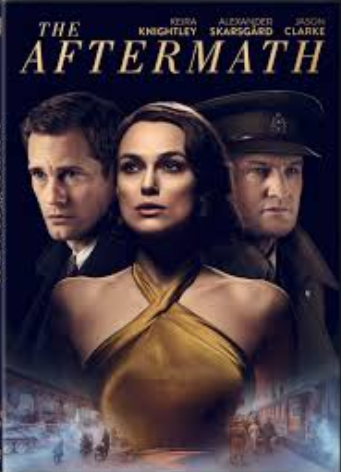 The Editors could not line up a writer to review this period drama but that does not mean we don’t want to draw your attention to it. It is the theatrical that leads off HBO’s lineup for 2020. THE AFTERMATH is set in postwar Germany in 1946. Rachael Morgan (Keira Knightley) arrives in the ruins of Hamburg in the bitter winter, to be reunited with her husband Lewis (Jason Clarke), a British colonel charged with rebuilding the shattered city. But as they set off for their new home, Rachael is stunned to discover that Lewis has made an unexpected decision: They will be sharing the grand house with its previous owners, a German widower (Alexander Skarsgård) and his troubled daughter. In this charged atmosphere, enmity and grief give way to passion and betrayal.

It sounds like a good enough plot to me. The movie, from Fox Searchlight, is rated R and comes from director James Kent and runs for 108 minutes Penning the screenplay are writers Joe Shrapnel and Anna Waterhouse, based on the 2013 novel of the same name by Rhidian Brook. Whether the movie works hinges on what boils up within the manor house that all partiers reside in and whether the eluded to emotions and actions evoked in this “charged atmosphere’ can capture the audience. Here is the trailer –

Some top critics, both pro & con, had this to say about the piece – Travers of Rolling Stone said, “The aftermath of WW2 is a resonant topic that is totally botched here. What’s left is soap opera, leaving suds that even the stellar Knightley, Skarsgård and Clarke can’t rinse off their performances” and Walsh from the Los Angeles Times stated, “the focus of [this] is in all the wrong places, spending time with characters in which we are unable to gain an emotional foothold. This misplaced attention makes for an erotic drama that feels cold, and a political thriller that feels empty.” With a slightly more positive outlook, Burr from the Boston Globe says, “the movie is both ridiculous and enjoyable.” RT boils it down to this –

So, is this an instance of a novel being more interesting than the filmed adaptation? After all, it was an international bestseller. It’s your call but HBO does offer it up. It debuts SATURDAY, JANUARY 04 @ 8:00pm.