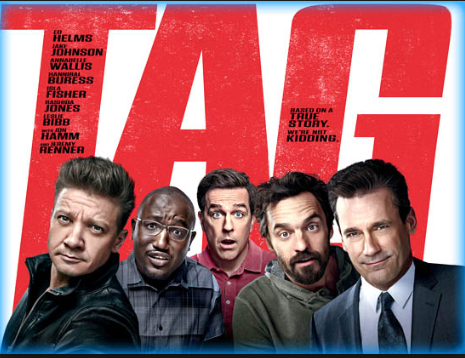 HBOWatch Editors were not able to line-up a writer to review TAG, but that doesn’t mean that we don’t want to draw your attention to it. The comedy, directed by Jeff Tomsic in his directorial debut, was released in June of 2018 and now premieres on HBO on SATURDAY, JANUARY 26 at 8:00pm. TAG has a fun and simple premise – adults playing the childhood game of Tag.

Hogan “Hoagie” Malloy (played by Ed Helms), Bob Callahan (played by Jon Hamm) , Randy “Chilli” Cilliano (played by Jake Johnson), Kevin Sable ( played by Hannibal Buress) and Jerry Pierce (played by Jeremy Renner) have been playing tag since they were nine years old, starting in 1983, during the month of May. Since then, the group’s main rule of the game is that the last one tagged is “it,” until next season. With Hoagie having been the last one tagged in the previous year, he first recruits Bob, the CEO of an insurance company, and then Chilli and Kevin for one last attempt to tag Jerry, who has seemingly never been tagged because of his strong athleticism and intelligence. Hoagie tells them that Jerry plans to retire after this year’s game because of his upcoming marriage. Rebecca Crosby, (played by Annabelle Wallis) a Wall Street Journal reporter doing a piece on Bob, joins them and decides to write an article on the friends. They are also accompanied by Hoagie’s wife Anna (played by Isla Fisher).

The one element that would make this doubly fun I think (I haven’t seen the movie) is the whole notion that this is based on real people & events. This is not a Hollywood contrived tale but a true story of adults extending childhood fun through the years despite what life throws at them. Another nice element is that the characters are played, according to a cast list, by three different actors through the years. There are moments of them as kids and teens as well tying the life and the bond these guys had all together.

What remains to be known is if all the scenes from the movie hold true to the real experiences or was the tag game during a funeral, for example, just fictionalized? All in all, was it a fun film? You have a chance to find out for yourself when TAG comes to HBO.  Rolling Stone said – “Based on a true story about fortysomething manchildren still playing tag, this bro-bonding comedy is all over the place, but fueled by a terrific cast and a partytime atmosphere that might be just what you’re looking for…” and Caution Spoilers called it – “A mainstream comedy that tries to be different, Tag reminded me of “Game Night” and “The House” in its determination to go to the edge of the cliff, peer over, then jump right into the abyss. Funny and fast, though sometimes repetitive, it works (just!).” Here is RT’s rating: