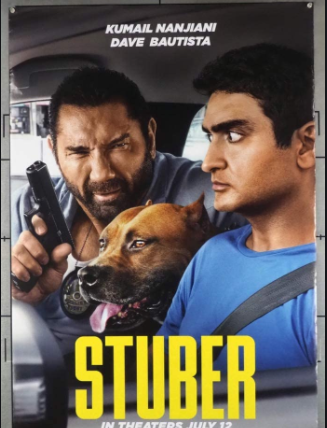 Don’t ask me why, but I thought this 2019 movie was already out there. But it is not in the catalog of movies on HBONow/Go and it does show that it debuts on SATURDAY, APRIL 18 to replace the live event, THE NIGHT OF TOO MANY STARS, which was canceled due to the pandemic. STUBER just might be of interest to HBO viewers because it stars SILICON VALLEY’s Kumail Nanjiani. It is a 2019 American buddy cop action comedy film directed by Michael Dowse and written by Tripper Clancy. Its plot follows a mild-mannered Uber driver named Stu (Nanjiani) who picks up a passenger who turns out to be a cop hot on the trail of a brutal killer.

Let’s break that down a bit. It is a buddy comedy so this duo of the innocent & the policeman has got to have great chemistry, right? So, if you haven’t seen the movie, picture Nanjiani paired up with…big bad…Dave Bautista and you have a chance for a pretty good paring. It gives Canadian director Michael Dowse (FUBAR) a go with a script from Tripper Clancy (I’m Not Okay With This). But are we okay with this movie? Maybe, the trailer will give us a sense of its style & tone.

Stu Prasad, a meager Uber driver obsessed with getting his first five-star review in the app, is forced by an aggressive Los Angeles Police Department detective Vic Manning to drive him around town to catch notorious drug lord Oka Tedjo. For Vic, it is especially personal, as Tedjo had murdered Sara Morris, Vic’s rookie partner, six months earlier. However, Vic is unable to do the task alone as he recently got a laser eye surgery that prevents him from having good sight. Uh, right.

LA Weekly says – “If Stuber is any indication, Hollywood cinema is starting to sputter behind the zeitgeist, relying on fire and fart jokes.” The Atlantic says – “If you’re looking for a throwback to simpler, sillier times (with a dash of self-awareness about the state of toxic masculinity in 2019), it should just about satisfy.” Listen, if you are one not still working your 40 hours perhaps STUBER might just carve out 1 hour and 33 minutes of your time. You know the drill; it debuts Saturday night at 8:00pm and uploaded to the streaming sites for a while. Seek it out if you think Nanjiani/Bautista sounds like a good thing. If you note the RT rating below the critics may give it a low rating, but audiences liked the teamup. 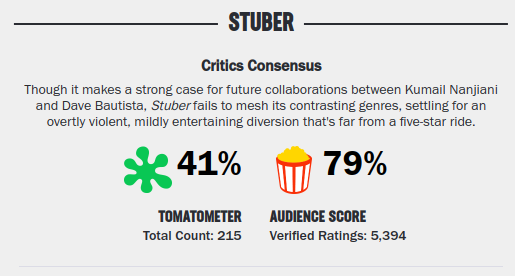