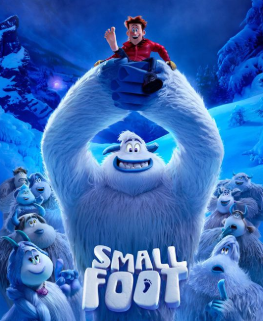 HBOWatch Editors were not able to line-up a writer to review this animated feature from Warner Bros. Pictures but that doesn’t mean that we don’t want to draw your attention to it. Off the bat though, it does lead me to a question. So, do adults only watch animation if it is a Pixar flick or if they have a young brood to entertain? Just wondering as I tell you about the latest animation movie to premiere on HBO. Are you going to watch SMALLFOOT?

The 1-hour 37-minute movie is directed & co-written by Karey Kirkpatrick (Chicken Run). Other writes credited are Clare Sera (Blended), John Requa (Bad Santa) and Glenn Ficarra (Bad Santa). Together they crafted the screenplay of a Yeti family and their search for a mythological creature. It is fashioned as a 3D computer-animated musical comedy with some voices you may recognize. Channing Tatum (Kingsman, The Golden Circle), James Corden (CBS’ Late, Late Show), Zendaya (EUPHORIA), Common (The Hate U Give), LeBron James (THE SHOP), Gina Rodriguez (Carmen Sandiego), Danny DeVito (Dumbo) and Yara Shahidi (ABC’s Black-ish) all give voice to characters.

Enough of that – is there a plot you ask. The Yetis live atop the tallest mountains of Nepal and have always heard the stories of the Smallfoot, a mythological creature who leaves at the bottom of the mountains and has only been rumored to be seen. Likewise, there are humans at the bottom who have heard of the legends of the Yeti living in the higher altitudes above. One day each party discovers for a certainty that the other exists. Migo (Tatum), the Yeti meets Percy (Corden), the human and though they become friends the other parties, the Yeti tribe (Zendaya, Common, James, Rodriguez & DeVito) and the humans including Shahidi’s character Brenda are not as friendly. Thus, a tale of fear, excitement and ultimately acceptance begins. Maybe, the trailer will help explain.

It is something you’d care for? Again, I ask do adults watch this sort of thing for their own enjoyment. The critics have to watch and this is what they say; Variety didn’t care for it – “if “Smallfoot” proves anything, it’s not the existence of yetis, but the need for a fresh approach to such lazy storytelling.” But Rotten Tomatoes says – 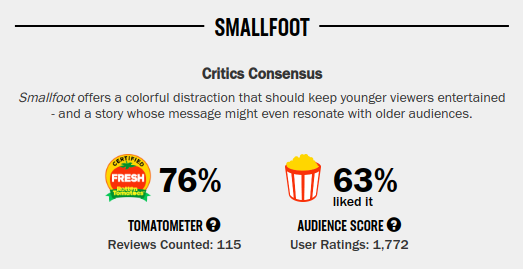 Find SMALLFOOT debuting on HBO SATURDAY, MAY 18at 8:00pm and let us know if you are an adult who likes family animation.