The Editors could not line up a writer to review this movie from the DC Extended Universe but that does not mean we don’t want to draw your attention to it. Care to settle down in front of SHAZAM!?

SHAZAM! is a 2019 American superhero film based on the DC Comics character that finds Billy Batson capable of being a superhero once he calls out the magic word bestowed on him by a wizard. Produced by New Line Cinema and distributed by Warner Bros. Pictures, it is the seventh installment in the DC Extended Universe. Directed by David F. 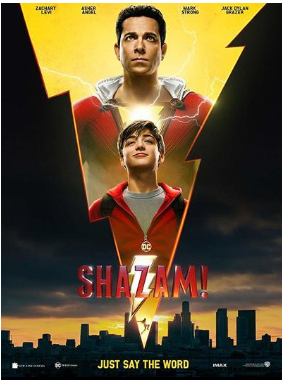 Sandberg from a screenplay by Henry Gayden, and a story by Gayden and Darren Lemke, the film stars Asher Angel as Billy Batson, a teenage boy, who becomes a superhero with flight, a cape and such played by Zachary Levi. The villain of the piece, because every superhero has to have a nemesis is Dr. Thaddeus Sivana, played by Mark Strong.

The film grossed over $364 million worldwide, making it the lowest-grossing film of the Extended Universe but still a box office success. The film received positive reviews from critics, with praise for Sandberg’s direction and the performances. Like all these types of movies, you’ve got to have a solid hero & villain. Does this movie give us that? Upon shouting out the name of the wizard, Shazam (in this case, played by Djimon Hounsou), the teen Batson comes the superhero with the Wisdom of Solomon, the Strength of Hercules, the Stamina of Atlas (near-limitless resilience), the Power of Zeus (lightning control and magical resistance), the Courage of Achilles (martial prowess and near indestructibility), and the Speed of Mercury (also provides flight). That hero, again personified by Levi, is a more light-hearted hero and the tone of the whole movie takes that approach. Did that tone help this movie along?

As for the villain, Dr. Silvana is a physicist who had grown up as an outcast and a black sheep of his wealthy family and was himself summoned by the Wizard Shazam as a child but was not chosen as his champion. Thus, he is full of sour grapes and takes it out on others. Boo, Hoo. So, he is vengeful but does he wield a power or two? I guess you’ll have to watch the movie to find out.