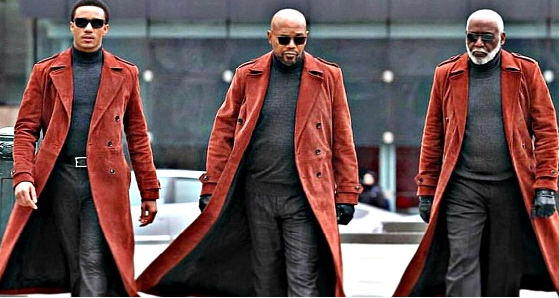 This is not a look at the 1971 original Shaft but the 2019 return of that urban legend and his offspring.  Now, I wish it was the original because I remember it from my youth with Richard Roundtree and the Isaac Hayes beat. It debuted right at the apex of the urban sprawl in cinematic history. It was all about what goes down on the hip streets of the city. It is also a piece of what they call blaxploitation. You can watch it for yourself on Prime Video. In that movie, John Shaft (Roundtree) is a private detective in New York City who is hired by a Harlem mobster to rescue his daughter from the Italian mobsters who kidnapped her and it is filmed right in the heart of the city. It is filled with Black Power and race relations and an Oscar-winning theme song.

There were two sequels and a sequel/reboot with Samuel L. Jackson in 2000 and alongside Roundtree, Jackson assists in continuing the Shaft saga with this latest film. In 1989, John Shaft II, his wife Maya Babanikos, and his infant son John “JJ” Shaft Jr. survive an assassination attempt by drug lord Pierro “Gordito” Carrera. Concerned that Shaft II’s lifestyle will put them in danger, Maya leaves him and raises JJ on her own. 25 years later, JJ is an FBI agent and a cybersecurity expert with a degree from MIT.   After his childhood friend Karim is said to have died because of a heroin overdose, JJ concludes he must have been murdered. JJ travels to Harlem to investigate Manuel, the drug dealer who runs the neighborhood and sold the heroin that allegedly killed Karim, but is violently ejected from his property. While being treated for a minor injury in the hospital by JJ’s

other childhood friend and his own crush Sasha, he shows her Karim’s toxicology report. She notes that the amount of heroin in Karim’s system would have killed him long before he could have taken that much by himself, suggesting that he was indeed murdered. With no other recourse, JJ turns to Shaft II for aid. Shaft II agrees to help after realizing that JJ’s case may lead him to Gordito. The two begin investigating together, but JJ’s progressive white-collar outlook on life clashes with Shaft II’s old-school street ways. After confronting Manuel again, the Shafts investigate “Brothers Watching Brothers”, the drug rehab clinic Karim was a part of. There they learn that Karim stopped going to rehab in favor of attending services at a mosque currently under suspicion by the FBI for terrorism.

Where it goes from there is up to you to find out. It is SHAFT…with Samuel L. Jackson as John Shaft, a detective turned private investigator, father of JJ and son[a] of the original John Shaft; Jessie T. Usher as John “JJ” Shaft III, an FBI agent, estranged son of the younger Shaft and grandson of the original Shaft.; Richard Roundtree as John Shaft, Sr., legendary private investigator, father of Jackson’s Shaft; Alexandra Shipp as Sasha Arias, JJ’s childhood friend and love interest and Regina Hall as Maya Babanikos, Shaft II’s ex-wife and JJ’s mother. Here is what our go-to critics say – 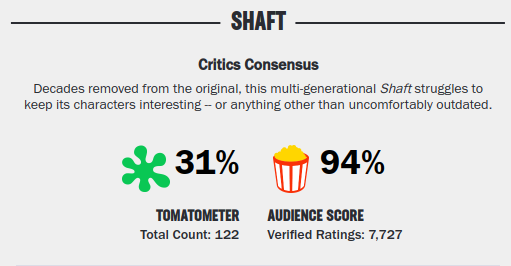