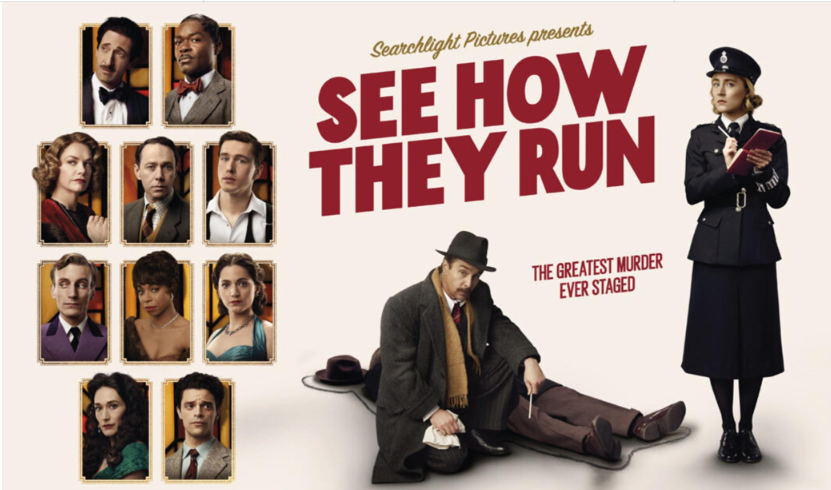 I always liked a good Agatha Christie novel, back when I was a more voracious reader of a good hardback book. Well, this movie has now come along and seems to harken back to those old tomes. It seems to be a fun whodunit in the same vein, though it is not necessary it seems to be familiar with the format utilized in Christie’s novels to take in this movie. SEE HOW THEY RUN begins with a voice-over explaining how this story runs parallel to a Christie novel and then proceeds to use that same format for the movie itself. 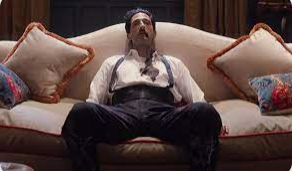 In the movie, it is 1953 London where Agatha Christie’s play “The Mousetrap” celebrates its 100th performance, and where sleazy American director Leo Köpernick (Adrien Brody) attempts to convince producer John Woolf (Reese Shearsmith) to allow him to direct the film adaptation. Of course, as is the Hollywood way, the version the director has in mind is far removed from the original plot which doesn’t sit well with the theatrical team. Then at the after party, after Köpernick’s drunken behavior towards the female lead Sheila Sim (Pearl Shandra) leads to a fistfight with her husband and co-star Richard Attenborough (Harris Dickinson), Köpernick is killed backstage by an unseen assailant.

Inspector Stoppard (Sam Rockwell) investigates the murder, shadowed by the inexperienced Constable Stalker (Saoirse Ronan) Everyone at the theatre is declared a suspect and a potential victim, as is the Christie format. This includes the play’s producer Petula Spencer (Ruth Wilson of HBO’s HIS DARK MATERIALS), Woolf’s wife Edana Romney (Sian Clifford), and Mervyn Cocker-Norris (David Oyelowo of HBO Films’ NIGHTINGALE). Stoppard attempts to close the theatre until the murder is solved and thus our little mystery is off and running.

The deduction you need to make is whether it is worth 1 hour and 40 minutes of your time. The movie has been heralded as a nice blend of the classic whodunit and subtle comedy. The New York Times states, “With a sprightly wit and an all-star cast to bring it to life, the movie manages to be a loving parody of theater gossips, postwar London and Christie’s murder mysteries all at once.” Empire Magazine says the movie is “with lots of laughs, oodles of style and played with verve by a quality cast. It also reconfirms Saoirse Ronan as a comedy god.” But to be fair, The Playlist wrote, “Comedy is all about timing, and the timing here is all off, so the laughs are disturbingly few. What a missed opportunity this is.” 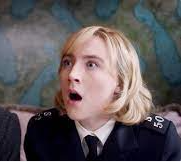 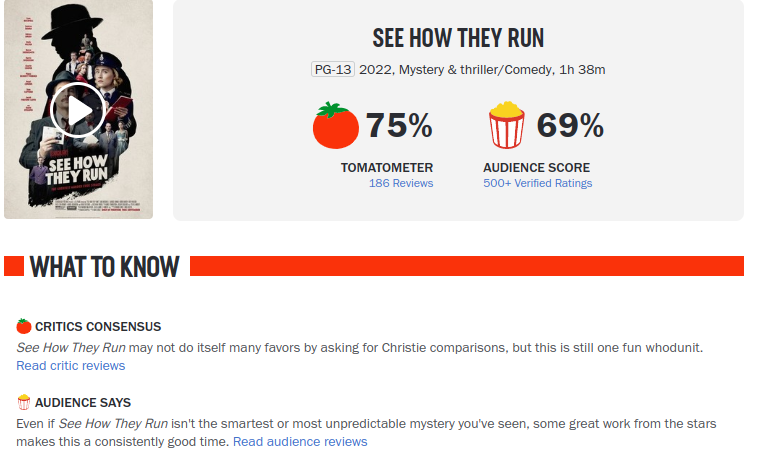