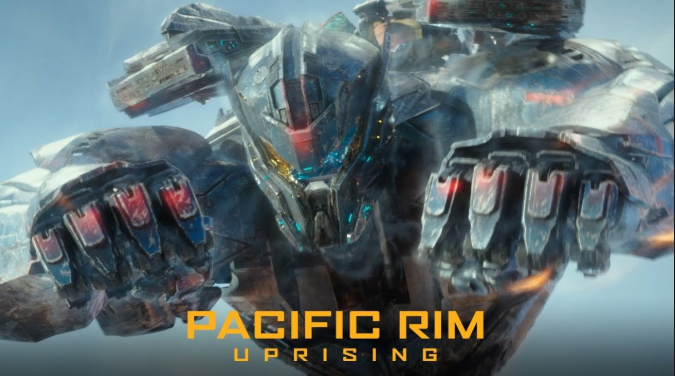 HBOWatch Editors were not able to line-up a writer to review PACIFIC RIM: UPRISING, but that doesn’t mean that we don’t want to draw your attention to it. It is more of the same regarding premise from PACIFIC RIM, just different characters from different backgrounds. But there is no way around that basic premise – warriors need to suit up in their robotic Jaeger armor and take on the Kaiju (CGI, not rubber-suited monsters) slipping through some portal.

John Boyega (Star Wars: The Force Awakens) stars as the rebellious Jake Pentecost, a once-promising Jaeger pilot whose legendary father (the Idris Elba character) gave his life to secure humanity’s victory against the monstrous Kaiju. Jake has since abandoned his training only to become caught up in a criminal underworld. But when an even more unstoppable threat is unleashed to tear through our cities and bring the world to its knees, he is given one last chance to live up to his father’s legacy by his estranged sister, Mako Mori (Rinko Kikuchi)-who is leading a brave new generation of pilots that have grown up in the shadow of war. As they seek justice for the fallen, their only hope is to unite together in a global uprising against the forces of extinction. Jake is joined by gifted rival pilot Lambert (The Fate of the Furious‘ Scott Eastwood) and 15-year-old Jaeger hacker Amara (newcomer Cailee Spaeny), as the heroes of the PPDC become the only family he has left. Rising up to become the most powerful defense force to ever walk the earth, they will set course for a spectacular all-new adventure on a towering scale. This movie is directed by Steven S. DeKnight (Netflix’s Daredevil), and also stars Jing Tian, Burn Gorman, Adria Arjona and Charlie Day.

So, the big question would be once you got the alien & robotic behemoths lined up for battle what else is there? Surely, the fight scenes are not enough to hold anyone’s interest, right? Beyond the fact that they save the world do you find yourself caring for this team of Jaeger pilots? I haven’t seen anything past the trailer but I say, leave the Kaiju alone. Let’s have the Jaeger’s take on the Transformers instead.

Below is Rotten Tomatoes’ thought. If you love the battle royale go for it when PACIFIC RIM: UPRISING debuts on HBO Saturday, November 17 at 8:00pm.