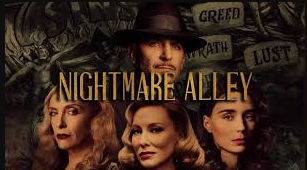 Man, to find the time to watch a movie, especially a 2 ½ hour one. Someday I hope to catch Guillermo Del Toro’s NIGHTMARE ALLEY. For now, I’ll ask you to watch it for me. 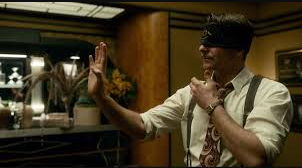 This neo-noir psychological thriller, directed by Guillermo Del Toro from a screenplay by del Toro and Kim Morgan, is based on the 1946 novel of the same name by William Lindsay Gresham. It is actually the second telling of the novel as it was also filmed in 1947. That earlier version starred Tyrone Power, with Joan Blondell, Coleen Gray, and Helen Walker. Power, wishing to expand beyond the romantic and swashbuckler roles that brought him to fame, requested 20th Century Fox’s studio chief Darryl F. Zanuck to buy the rights to the novel so he could star as the unsavory lead “The Great Stanton”, a scheming carnival barker. This time out Bradley Cooper takes on the crazy carny role. 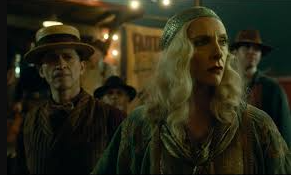 Stanton Carlisle (Cooper) starts life over taking a job as a carny with a traveling carnival. Stan is disturbed at how any man could sink to the level of performing as a geek (look it up) at the sideshow attraction. Clement Hoately, the carnival owner (Willem Dafoe), shows his hand on how he wrangles up a geek. He explains that he seeks out alcoholic or drug-addicted men with troubled pasts, and lures them in with promises of a good job and opium-laced alcohol. He then uses their dependence until they sink into madness and depravity, thus creating a new sideshow attraction. Also, part of the act is a mentalist billed as Madame Zeena (Toni Collette). She and her husband Pete (David Strathairn) take Stan in their confidence and teach him the trick of their clairvoyant trade. He is warned however the cautions of the skills and be wary of how to use them. Wanting to get rich quickly and out of the odd environment and the freaky geeks, he and his newfound friend Molly (Rooney Mara) run off to become mentalists themselves. 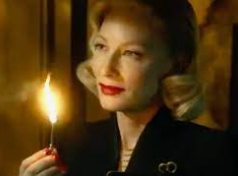 Needless to say, Stan abuses those skills and gets in over his head. All that comes to hand due to Dr. Lilith Ritter (Cate Blanchett) and her employer, a judge named Kimball (Peter MacNeill). What deep trouble does Stan get into as he keeps up building his sideshow scam? Of course, all this plays out in moody Del Toro style. The trailer clearly sets that mood.

But is the story as strong and the characters as bold as the oddity and shadow Del Toro wraps it in? Rotten Tomatoes sums it up this way – 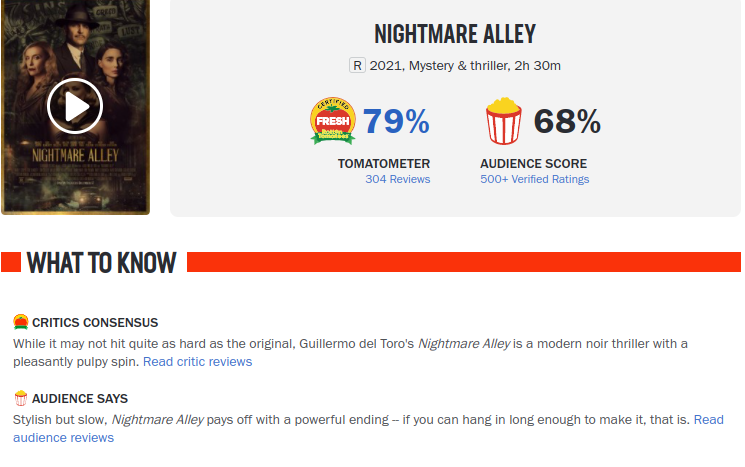 Regardless, if I had the time to commit, I probably would catch this one; just for the style of it all if nothing else, but at over two hours long? So, if anyone else happens to catch it, it has been playing on HBO & HBO Max for a week or so now (it was the Saturday night movie on February 05), drop a comment below. I’ll read them and see if it’s worth my time.