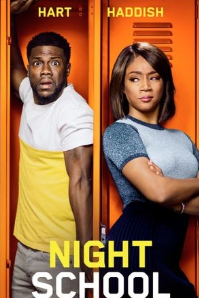 HBOWatch Editors were not able to line-up a writer to review the comedy in question but that doesn’t mean that we don’t want to draw your attention to it. NIGHT SCHOOL, from Universal Pictures, is a comedy pretty much generated by comic actor Keven Hart. Hart (2002 Paper Soldiers – 2019 Life Of Pets 2) serves as co-writer and producer as well as a star of the film. Very simply, the story follows a group of adults who set out to earn their GEDs via night school. But want is intended to click in this movie is not the plot as much as the comedic chemistry generated by Hart and his co-star Tiffany Haddish.

Haddish, who made people notice her in Girl’s Trip, plays the teacher to Hart’s student. Teddy Walker (Hart) goes to his old high school in the belief that he can just charm the new principal into giving him the relevant qualifications he needs to move to a better job than that of a BBQ grill salesman. He is able to make arrangements to attend night school that semester taught by the unorthodox Carrie (Haddish) but finds himself still frustrated by his old school day deficiencies. Teddy convinces his classmates to join him in stealing test answers, resulting in him getting busted for it and, of course, being given a second chance. I’m guessing all is a happy ending and he graduates all do to what turned out to be a caring teacher.

So, the plot may be weak, but does the partnership of Hart/Haddish save the day and the movie? New York Magazine said – “There’s a lot of sophomoric silliness Night School feels obligated to perform. But there’s a heap of good intentions behind it, and enough big laughs to make us want to forgive it in the end.” The Washington Post liked it enough to say – “the movie gives some depth to its misfits, and ultimately sends the valuable message that nobody should be ashamed of who they are.” And Newsday chimes in with – “the Haddish-Hart chemistry isn’t totally combustible, but this good-natured back-to-school comedy has its moments.” With the last say is Rotten Tomatoes –

So, what do you say? Do of-the-moment comedians automatically make this a good movie or aren’t they really given enough to make them shine and audiences laugh? Check it out for yourself when NIGHT SCHOOL debuts on HBO and the streaming sites SATURDAY, MAY 11 at 8:00pm.