Tom Hanks is back with another Academy pleaser from Universal Pictures. Soon WarnerMedia will lose movies from that studio to Peacock, but for now we still got works like this one, NEWS OF THE WORLD.

The movie is a Western drama from 2020 co-written and directed by Paul Greengrass and is based on the 2016 novel of the same name by Paulette Jiles. In 1870, Captain Jefferson Kyle Kidd (Tom Hanks), a former Confederate officer who served in the 3rd Texas Infantry, makes a living traveling town to town reading newspapers to local residents for ten cents per person. Following an evening of news reading, Kidd sets out for his next location and comes across an overturned wagon on the road. Investigating, he finds the body of a lynched black freedman and a live young white girl named Cicada (Helena Zengel), Johanna, according to her papers, is dressed in Native American clothing and speaking Kiowa. After an encounter with a Union Army patrol, Kidd is instructed to take the girl to Union officials at an outpost in a town up the road, where they will sort out her Bureau of Indian Affairs paperwork and return her to her surviving family. Reluctantly, Kidd acquiesces to the request.

Of course, things do not go as planned and Kidd takes on the search himself. Throughout the search for the child’s proper parentage, some sort of adventure and danger must arise that causes some sort of interesting relationship between the two. The dynamic between them has to hold the audience whether or not her parents are found. In the context of the story, the news of the world says that it is still an unsettled time after the war and families are scattered and tensions are still high. Will Kidd be able to add the story of how he reunited a lost child with her kin? I guess you’ll have to engage in the 118-minute tale to find out.

We do know that it was a well-done story at that. At the 93rd Academy Awards, the film received nominations for Best Original Score, Best Cinematography, Best Production Design, and Best Sound, while Zengel received nominations for Best Supporting Actress at the Golden Globes and Screen Actors Guild Awards. The critics put their two cents worth in as well. IndieWire says of the movie – “If Greengrass’ broadly entertaining (if gallingly relevant) film is a bit too soft and spread thin to hit with the emotional force that it could, so much of its simple power is owed to the grounded nature of the director’s approach, which allows these desperate characters to feel as if they’re trying to escape the very genre that threatens to define them forever.”

RT sums it up this way – 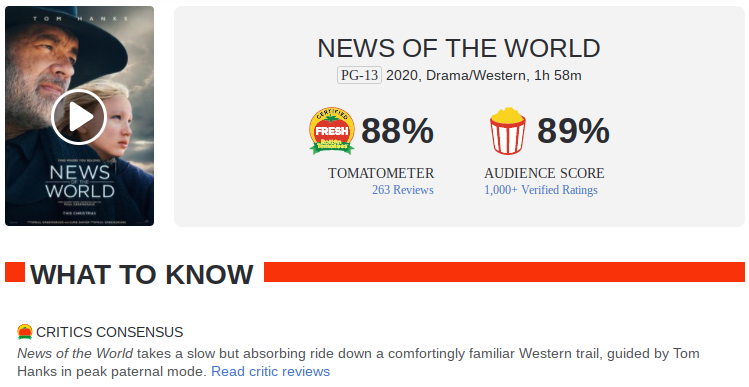 NEWS OF THE WORLD debuts on HBO on SATURDAY, SEPTEMBER 04 at 8:00pm. Other times below – 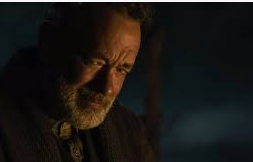