If I had time to watch movies, I’d watch this one, but the time is just not there. So, I do my usual routine of telling you of the latest Saturday night flick that a writer is not reviewing. I thought one of them would have singled out this one but, it is up to me to stir your interest in MOTHERLESS BROOKLYN, a 2019 crime drama written, produced & directed by Edward Norton (American History X). Based on the 1999 novel of the same name by Jonathan Lethem. The movie, et in New York City in 1957, follows a private investigator with Tourette syndrome, who is determined to solve the murder of his mentor

It seems this work was a passion project for Norton which explains why he wore multiple hats behind the scenes as well as playing the lead character Lionel Essrog. Lionel works at a detective agency alongside Gilbert Coney (Ethan Suplee, ENTOURAGE), Danny Fantl (Dallas Roberts, Insatiable), and 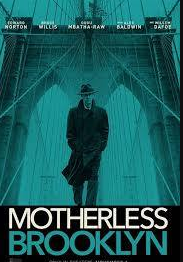 Tony Vermonte (Bobby Cannavale, VINYL). Their boss, Frank Minna (Bruce Willis, Glass), rescued them as children from an abusive orphanage. Nicknamed “Motherless Brooklyn” by Frank, Lionel has Tourette syndrome, often alienating him from people, but his strong verbal and photographic memory makes him a good detective. Also, in the cast is Leslie Mann as Mrs. Minna, Cherry Jones, HBO fave Michael K. Williams and Alec Baldwin and Willem Defoe as the Randolph brothers.

One particular case Minna and his agents are running turns for the worse and Minna loses his life and despite his fits and shouts Lionel is able to go after the big wise guys responsible. I’m not revealing anything that isn’t in the trailer. This story is all about how Lionel Essrog, despite his setbacks, carries out justice.

Let’s turn to what the critics say. The New York Times called it “a very smart movie, bristling with ideas about history, politics, art and urban planning.” RogerEbert.com gave the film 3 out of 4 stars, praising “the unabashedly political nature of the project”; Rolling Stone gave the film 4 out of 5 stars, stating, “it’s Norton’s own performance that brings emotional connection to Motherless Brooklyn” and Variety commented that “Lionel represents both an enormous new challenge and an incredibly unique variation on the otherwise worn-out private eye archetype.” Not everyone adores it though, as the aggregator Rotten Tomatoes points out –

So, if you want an R-rated crime story with an unusual detective on the scene it sounds like MOTHERLESS BROOKLYN is the flick to watch. It debuts on HBO SATURDAY, JULY 26 @ 8:00pm.