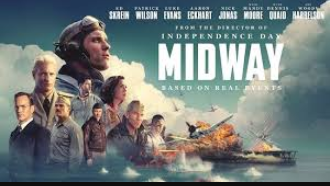 War movies have always been associated with patriotism and heroics. So, the theatrical movie that debuts this holiday weekend is a war picture. It is the update telling of a war conflict told before but this time the enhanced VFX males for a different movie. We go to the Battle of Midway in this picture from Lionsgate. called MIDWAY.

Of course, the big questions for such a movie are – Is it exciting? Is it accurate? Well, I’m sure the real WWII buffs can pick apart some inaccuracies, but don’t forget most of the characters are likely fictitious creations to fit into the time & scene. The battle scenes, all under the direction of Roland Emmerich, I’m sure to hold impact. But what did the critics say? Should the 1976 Universal picture have been enough? The Washington Post liked it saying, “it tells a story that’s vividly and viscerally rendered, with all the entertainment value of a big, old-fashioned

war movie, cutting back and forth between the home front and front line.” and Variety stated, “The film’s drama is B-movie basic. But the destructive colliding metal-on-metal inferno of what war is what makes “Midway” a picture worth seeing”; and Time Out said, “Steel battleships and raining fire are Midway’s primary colors; the movie flaunts its hugeness at every turn. You’ll never mistake it for the real thing, but Emmerich’s eye for historical detail is scary.”

So, the VFX is good. But other critics didn’t get on the bandwagon for this one. The Wrap says, “There’s no denying that he fills his film with breathtaking images of aerial action and naval warfare, but like many of Emmerich’s movies, even the better ones, Midway loses sight of the humanity inside its vast vistas of devastation.” Chicago Sun-Times lets us know that “These terrific actors and many more are stuck playing one-dimensional characters who have to deliver lines straight out of a second-rate, mid-20th century war movie while competing with 21st century CGI pyrotechnics.” So, the screenplay failed it, which is exactly what Rotten Tomatoes summarizes: