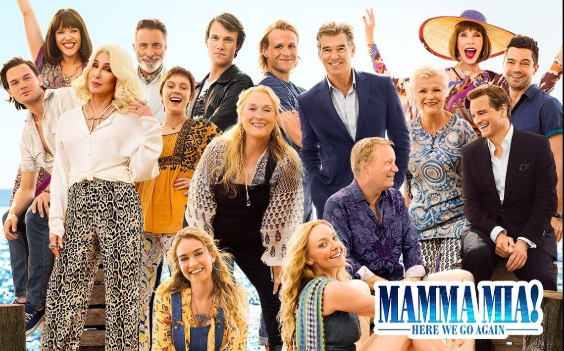 HBOWatch Editors were not able to line-up a writer to review this movie, but that doesn’t mean that we don’t want to draw your attention to it. MAMA MIA! HERE WE GO AGAIN is a 2018 musical romantic comedy written and directed by Ol Parker, from a story by Parker, Catherine Johnson, and Richard Curtis. It is a follow-up to the 2008 film Mamma Mia! A sequel seemed inevitable as the first movie was a box office smash. But does the sequel do it justice? Well, it did garner $394 million worldwide which was considered a success even if the original tallied $615 million. the original’s cast came back for the sequel and added some characters as well. Check out this cast – Dominic Cooper, Amanda Seyfried, Pierce Brosnan, Colin Firth, Stellan Skarsgård, Jeremy Irvine, Josh Dylan, Hugh Skinner, Lily James, Jessica Keenan Wynn, Alexa Davies, Christine Baranski, Julie Walters, Andy García, Meryl Streep, and Cher.

In the first one, on the Greek island of Kalokairi, 20-year-old bride-to-be Sophie Sheridan reveals to her bridesmaids, Ali and Lisa, that she has secretly invited three men to her wedding without telling her mother. They are the men that her mother’s diary reveals could have been her father. She dreams of being given away by her father at her wedding and believes that after she spends time with them, she will know which is her father. Now in the sequel, the plot is set after the events of Mamma Mia!, and also features flashbacks to 1979, telling the story of Sophie’s mother ’s arrival on the island of and her first meetings with the three possible fathers.

Of course, all the goings on are surrounded by the music of ABBA. “Thank You for the Music, “”When I Kissed the Teacher,” “I Wonder (Departure),” “Waterloo,” “SOS,” “The Name of the Game,” “Knowing Me, Knowing You,” “Angel Eyes,” “Super Trouper” and more were used. Fans and critics loved it all. On Metacritic, the film has a weighted average score of 60 out of 100 & CinemaScore gave a grade of “A–.” I say though, that you got to be a fan of that kind of movie regardless of who is in it to enjoy it. Having not seen it or the original I have to ask, Do the characters and their story carry the story (I hear Cher does a great role) or is it the songs and choreography that makes the movie pop? If you are set to watch it you tell me. Here is what RT says – 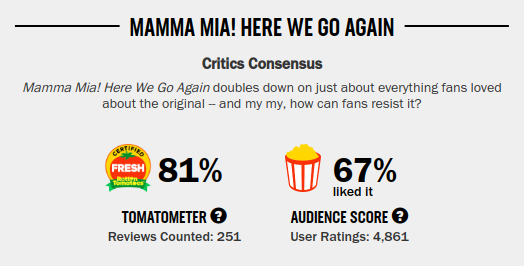