The Editors could not line up a writer to review this movie but that does not mean we don’t want to draw your attention to it. Man, if I had time to watch movie’s I’d watch the first Lego movie then this one back-to-back because it just seems silly & fun and we all need that in our lives from time to time. 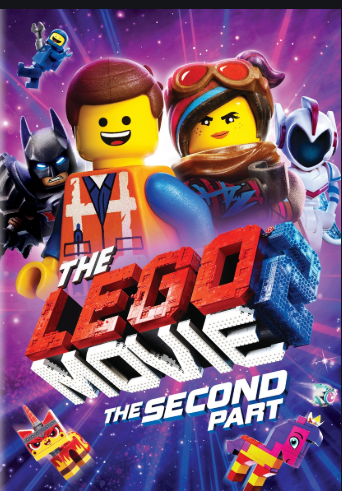 We’re going to take the lazy out here and classify this movie via Wikipedia. It states – The Lego Movie 2: The Second Part is a 2019 computer-animated adventure comedy film produced by Warner Animation Group and distributed by Warner Bros. Pictures. Directed by Mike Mitchell, it is a direct sequel to The Lego Movie (2014) and the fourth film in the franchise following the releases of 2017’s The Lego Batman Movie and The Lego Ninjago Movie. The film stars Chris Pratt, Elizabeth Banks, Will Arnett, Charlie Day, Alison Brie, Nick Offerman, and Will Ferrell reprising their roles from the previous film, whilst new cast members include Tiffany Haddish, Stephanie Beatriz, and Maya Rudolph (replacing Amanda Farinos). In the film, Emmet Brickowski attempts to rescue his friends from the Systar System, while dealing with a coming cataclysm known as “Armamageddon.”

Beyond that, I’m pretty blank out on the rest of the plot even though I consulted two different places to get it. Whatever. Hopefully, the movie is full of snarky pop culture riffs or something cause it is surely lost on me. Maybe, that’s why no one around here reviewed it? Maybe, I should be glad I didn’t have the time to seek this movie out. The trailer didn’t sell it either.

After making $8.5 million on its first day, weekend estimates were lowered to $31 million. It went to debut to $34.1 million, finishing first at the box office but marking a 50% decline from the first film. Deadline attributed the low opening to franchise fatigue due to the release of two spin-offs prior to The Lego Movie 2, as well as Warner Bros. promoting the film using similar marketing tactics from the first film, leading audiences assuming the sequel derivative and indistinguishable from its predecessor.

Chris Nashawaty of Entertainment Weekly says that while it was better than most other films it didn’t recapture the surprise of the first film, saying “Everything is still awesome. Just a little bit less so.”[ For The Hollywood Reporter, Michael Rechtshaffen wrote that the film brought “little that’s fresh or funny to the interlocking brick table despite boasting a script penned by originators Phil Lord and Christopher Miller.”

So there it is. Good, but not great and a bit too similar to the first movie. All in all, it is there if you want it beginning Saturday, September 21 on HBO at 8:00pm.