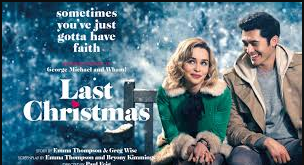 Okay, we get it. This is a Christmas in July sort of thing. But, you know, the Holiday season kind of makes many merry & bright, so what is the harm in trying to tap into that festive mood right about now? I don’t know how well this movie, LAST CHRISTMAS, offers that feeling but if it fails t doso,m at least you’ve got Emilia Clarke.

That’s right, for HBO fans, this may be the first role you will see Emilia C. in outside of her breakthrough role as Daenerys Targaryen in GAME OF THRONES. She is accompanied in this movie by Henry Golding (Crazy Rich Asians) as a potential couple in this romantic comedy. Last Christmas is a 2019 work directed by Paul Feig (Bridesmaids, HBO’s BORED TO DEATH) and written by Bryony Kimmings and Emma Thompson (yes, that one!), who co-wrote the story with her husband, Greg Wise. Based on the song of the same name, and inspired by the music of George Michael, the film stars Emilia Clarke as a disillusioned Christmas store worker who forms a relationship with a mysterious man (Henry Golding) and begins to fall for him. Hmm, does the trailer capture the Holiday spirit?

Nope, or at least I didn’t think so. It is more a traditional romantic comedy about how this guy Tom reaches Kate how to find the moments and live life. It so happens to be Christmas time and Kater so happens to work in a Christmas-themed store but it looks like this relationship could have happened at any time, really. Michelle Yeoh plays Kate’s boss at the store and Emma Thompson plays her immigrant mother. George Michael & WHAM! music play throughout.

What do the critics say? The Los Angeles Times stated, “Slightly more elevated than your standard TV holiday rom-com fare, with a twist that can be seen coming from a mile away, it’s the performances and well-earned character arcs that make “Last Christmas” a satisfying holiday flick worth giving your heart to.” But the Observer said, “The depth of talent behind the screen and the appeal and attractiveness of the two stars should have resulted in something with slightly more than what we get here, which is essentially a Hallmark Christmas movie.” God knows there are enough of those. RT wraps it up this way:

So, whether you are out for a feel-goodwill kind of thing, this doesn’t seem it. But if you want Emilia Clarke without a dragon in sight then have at it. It’s Christmas in July with Last Christmas, debuting SATURDAY JUKY, 11 @ 8:00pm on HBO and its sites.