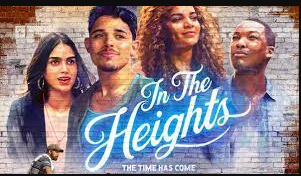 Just this past weekend, OCTOBER 30, IN THE HEIGHTS arrived on HBO and its channels. The statement I made when this movie premiered in theaters and on HBO Max as a Same-Day premiere still holds true which is, if you like the musical genre or adore Lin-Manuel Miranda because of Hamilton!, then you just might go for this movie.

In the Heights was a stage musical that hit Broadway from 2008-2011. Possibly due to Miranda’s growing popularity, the lyricist & composer had the opportunity to bring this story to film. The director to bring it to the format was Jon M. Chu who directed Crazy Rich Asians. The screenplay was penned by Quiara Alegría Hudes who also wrote the stage version prior. The 143-minute work launched in June of 2021 for Warner Bros. Pictures.

The story, through music & word, tells of the denizens of Washington Heights, which is the northernmost neighborhood in Manhattan, NYC. A total of seventeen songs fills the story out. The flavor of the language and sound is Cuban and such talents as Anthony Ramos as Usnavi de la Vega & Melissa Barrera as Vanessa Morales fill the screen with that vibe.

But does the movie capture that vibe? The New York Times gave the film a positive review, writing that “It’s a piece of mainstream American entertainment in the best sense — an assertion of impatience and faith, a celebration of communal ties and individual gumption, a testimony to the power of art to turn struggles into the stuff of dreams.” Rolling Stone stated, “In The Heights spins its lively, complicated tale. An aspirational immigrant story, but flows and overlaps and grows dense in unexpected ways. In both Miranda and Chu’s trademark style, this is all threaded together with life spilling into the streets, musical numbers that fold reality into fantasy with an aplomb that’s as pleasurable as it is overwhelming.” But we get it, movie musicals are not for everybody. If you want the song & dance, seek it out on HBO. 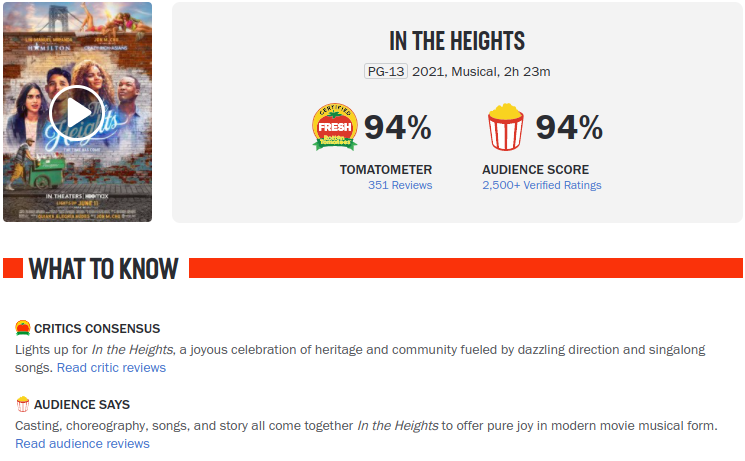