The movie schedule got a bit skewed this month with inconsistent listings in press releases. The return of REMINISCENCE already appeared and THE EYES OF TAMMY FAYE has surfaced on HBO Max, but has yet to debut as an HBO Saturday night movie. The Hugh Jackman movie was a Same-Day release that arrived on January 01but was reviewed already by us. Find it here. The Bakkers movie will be reviewed at a later time. What we do know for sure is that HITMAN’S WIFE’S BODYGUARD does debut on the channel SATURDAY, JANUARY 08 at 8:00pm ET. Here is a brief look at it.

The 1 hour-40-minute action-comedy continues with the characters from the 2017 movie The Hitman’s Bodyguard. It features Ryan Reynolds, Samuel L. Jackson, Salma Hayek, and Richard E. Grant reprising their roles, with Frank Grillo, Tom Hopper, Antonio Banderas, and Morgan Freeman joining the cast. In the film, suspended bodyguard Michael Bryce (Reynolds) must once again team up with hitman Darius Kincaid (Jackson) and his wife Sonia (Hayek) to stop a madman (Banderas) from launching a terror attack on Europe. It starts with Bryce preparing to retire from being a bodyguard and enjoying a well-deserved vacation only to be interrupted by Sonia to solicit his help in saving her kidnapped husband. Once the trio is back together Interpol needs their help in locating a terrorist mastermind named Aristotle Papadopoulos (Banderas), who wants to destroy the European power grid and infrastructure since the European Union is 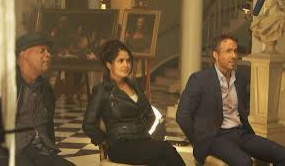 So, how well do they pull that off? Does director Patrick Hughes pull off his sequel? As we well know, in this kind of movie the right combination of ingredients is what makes it work. The dynamics between our heroes need to be just so to make it entertaining; the villain needs to be unique and scene-chewing and the action needs to pack a punch. Get that all going and a fun time is ahead.

As usual, though, we give you critical comments to help you decide that. The New York Times says, “The Hitman’s Wife’s Bodyguard” is loud, lazy, profane and well nigh incoherent. It’s also at times quite funny, with a goofy vulgarity that made me giggle.” They liked it in Down Under as The Australian puts it, “This is a well-acted, amusingly-scripted, poorly-plotted, violent, vulgar and profane bit of fun, for those who like that sort of thing.” Yeah, get the idea? Hollywood Reporter stated, “Its occasional laughs drown in a sea of action-comedy tropes that have been stale for decades. These actors deserve much better, and so do their fans.” We always give Rotten Tomatoes the last word and then we let you decide. Your type of movie for a cold January night? 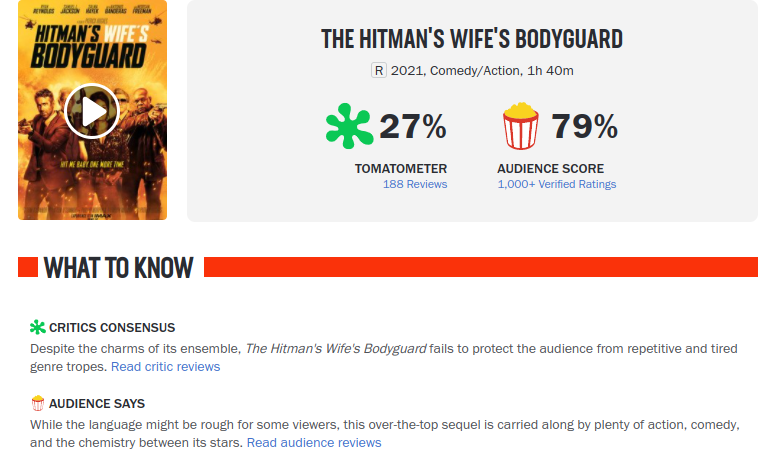 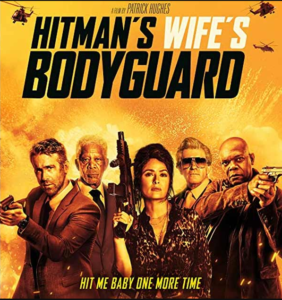