The Editors could not line up a writer to review GRETA but that does not mean we don’t want to draw your attention to it. The movie is a 2018 psychological thriller film directed by Neil Jordan and co-written by Ray Wright and Jordan. The film stars Isabelle Huppert, Chloë Grace Moretz, Maika Monroe, Colm Feore, and Stephen Rea, and follows a young woman as she befriends a lonely widow who becomes disturbingly obsessed with her. Halloween time seems like the right time to watch this one. 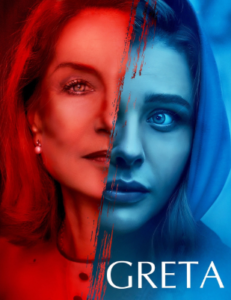 IMDb states the plot as follows – Frances (Chloë Grace Moretz), a sweet, naïve young woman trying to make it on her own in New York City, doesn’t think twice about returning the handbag she finds on the subway to its rightful owner. That owner Greta (Isabelle Huppert), an eccentric French piano teacher with a love for classical music and an aching loneliness. Having recently lost her mother, Frances quickly grows closer to widowed Greta. The two become fast friends – but Greta’s maternal charm begins to dissolve and grow increasingly disturbing as Frances discovers that nothing in Greta’s life is what it seems in this suspense thriller directed by Academy Award winner Neil Jordan.

So, that leaves the question of whether it is a good Halloween fright or not. Even, if it is a bit campy the 98-minute flick still could be a good night treat for the right kind of audience or a trick for those who thought something better from a talented cast& crew. Some critics liked it – Matthew Norman of the London Evening Standard says – “the pace seldom lags, the cinematography is luscious, and a dream sequence has a clever twist.” Kembole Cameron of Empire Magazine states – “Despite a familiar, somewhat tedious set-up, Greta truly comes into its own in the final act, a ’90s thriller throwback elevated by Isabelle Huppert tearing up the scenery and dancing all over it.” But Richard Lawson of Vanity Fair sums it up for the opposing viewpoint He says – “Huppert and Jordan are certainly capable of turning up the volume, but for whatever reason they pull back in Greta, getting stuck somewhere between shlocky art and arty schlock.” Lastly, we always add RT:

I say if you got nothing better for Saturday night, October 26 at 8:00pm then switch on HBO and give it a go.