Couldn’t snag a reviewer for this one, but we draw it to your attention none the less. It may star some kids but it is not for children at all. These tykes have potty mouths. GOOD BOYS is a 2019 American coming-of-age comedy film directed by Gene Stupnitsky, in his directorial debut, and written by Stupnitsky and Lee Eisenberg. The film stars Jacob Tremblay, Keith Williams, and Brady Noon as three sixth-graders who find themselves involved in a series of misadventures. After being invited to his first kissing party, 12-year-old Max (Room‘s Tremblay) is panicking because he doesn’t know how to kiss. Eager for some pointers, Max and his best friends Thor (Noon, of HBO’s BOARDWALK EMPIRE) and Lucas (Williams, Fox’s The Last Man On Earth) decide to use Max’s dad’s drone — which Max is forbidden to touch — to spy (they think) on a teenage couple making out next door. But when things go ridiculously wrong, the drone is destroyed. Desperate to replace it before Max’s dad (Will Forte, The Last Man on Earth) gets home, the boys skip school and set off on an odyssey of epically bad decisions involving some accidentally stolen drugs, frat-house paintball, and running from both the cops and terrifying teenage girls (Life of the Party’s Molly Gordon and Ocean’s Eight‘s Midori Francis).  Seth Rogen and Evan Goldberg serve as producers through their Point Grey Pictures banner.

To give you an idea just how raunchy this thing gets, check out the red-band trailer:

So, it isn’t for everyone, especially the tweens, but a number of critics lied it. The Toronto Star stated, “It… trades in lewd and crude humor, to be sure, but it does so by way of a funny story of a trio of Grade Sixers attempting to negotiate the hairpin turn from boyhood to manhood.” The Washington Post said, “The comedy… hits all the expected marks for raunch and vulgarity, with the bonus that it is actually also kind of sweet.” But some couldn’t get past the low-brow humor from the youths. The New York Times puts it this way – “It banks on your cruelty, which might be interesting if the movie acknowledged its meanness and didn’t smother it in the requisite late-act sentimental blather about friendship, family and so on.”

So, as is the case we any movie, it is up to you whether you mind that kind of movie. If you like Superbad or Sausage Party than this is for you. HBO debuts GOOD BOYS on Saturday, April 4 at 8:00pm. We leave it with Rotten Tomatoes’ opinion – 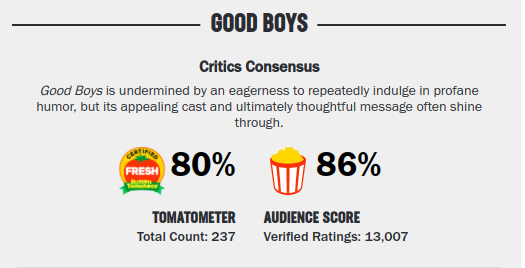