Now, who’d a thought this franchise would have lasted this long? We are talking about the ninth film in the franchise (plus, there is that spinoff). We are talking about a series that began in 2001 with the late Paul Walker. We’re talking Vin Diesel and Michelle Rodriguez sticking with most of the series, even if just cameos and, of course, we are talking illegal street racing, heists, spies, and all the high-octane crazy personas involved. And believe it or not, installments 10 & 11 have not run the red light but are green to go!

But this post is out to remind you that F9: THE FAST SAGA has hit HBO full speed. It debuted SATURDAY, MARCH 05 and now plays across HBO’s platforms. The film stars Vin Diesel, Michelle Rodriguez, Tyrese Gibson, Chris “Ludacris” Bridges, John Cena, Nathalie Emmanuel, Jordana Brewster, Sung Kang, Michael Rooker, Helen Mirren, Kurt Russell, and Charlize Theron. Over the course of this franchise, participants have come and gone. Director Justin Lin returns since his last turn in the driver’s seat of film # 6 in 2013 and a new screenwriter comes on board for this one leaving the franchise’s main writer Chris Morgan out of the project.

Plotwise, we’ve got a sibling rivalry going on. In 1989, Jack Toretto (J.D. Pardo) — father of Dom (Diesel), Jakob (Cena), and Mia (Brewster) — participated in a late model race, with his sons working in the pit crew. Dom argues with rival racer Kenny Linder (Jim Parrack) about his dirty tactics. During the race, Linder’s car clips Jack’s bumper, causing his car to crash and burn, killing him. A week after, Dom is arrested for beating Linder to near death. While serving his sentence, he recalls that Jakob had worked on their father’s car the day he died and concludes that Jakob killed their father. Upon release, Dom confronts and challenges Jakob to a race, forcing him to leave town when he loses. Jakob doesn’t take that lightly and the movie races on from there.

Do you follow this saga? Is your motor revved to watch or re-watch F9 on HBO? Critics are on the border as some tip in favor and others tip the opposite. Pete Travers of ABC News says “As usual the plot is stupid beyond saving, but the vehicular action is insanely entertaining. That’s a fair tradeoff for the adrenaline junkie in all of us who only wants Vroom cranked up to 11. Consider it done.” But New.com.au stated, “While the ambitious, bonkers action satisfies, F9 doesn’t get to coast on an incoherent story and lazy, repetitive beats that drag out for much longer than a quarter-mile.” But does it drag on for you or is the engine revved up? I guess that all depends on whether wild car stunts out of airplanes and such is enough for you. And remember, what has got to be F:X has got to be around that next sharp turn. 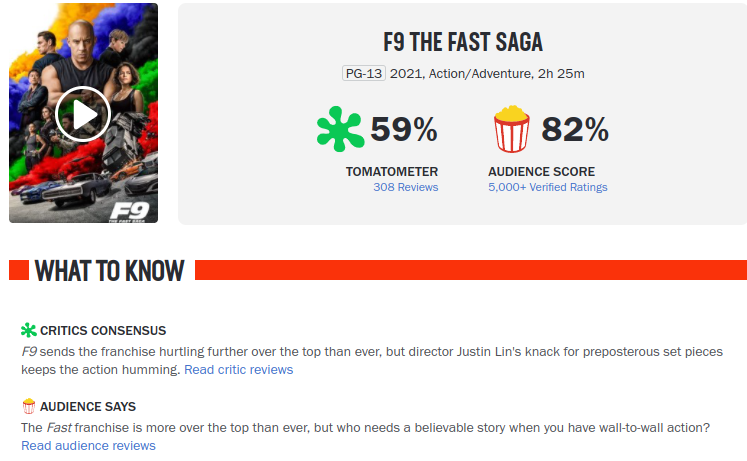