Okay, we can divide Elvis Presley fans this way – those who love his later Las Vegas years, those who love his early years including his film career, and those who relish the performer’s life from beginning to end. Elvis fans are a notable crowd and they have certainly seen this latest work about his life by now. It is ELVIS, directed by Baz Luhrmann. The film follows the life of the rock and roll icon, singer, and actor told from the perspective of his manager, Colonel Tom Parker. It stars Austin Butler in the title role with Tom Hanks as Parker.

Now you see why people were all shook up for this poicture? It premiered at the Cannes Film Festival on May 25, 2022, and was released in the United States on June 24, 2022 by Warner Bros. Pictures. The film was a box office success, grossing $286 million worldwide against its $85 million budget as well as becoming the second-highest-grossing music biopic of all-time behind Bohemian Rhapsody (2018). That healthy response tells us that young Mr. Butler must have truly captured the essence and style of the sensation just right and that Luhrmann must have beautifully taken audiences back in time to the raucous early rock & roll days. 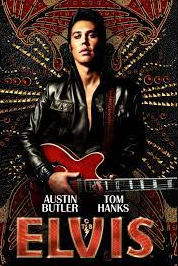 Even if you are not a big Presley fan perhaps you are of the era. So, perhaps you need to take in this movie whether it is for the first time or the umpteenth time and relive it all again. There is energy and plenty of swiveling hips to go around. But this is not just about the early days of the artist. The movie is all a recollection of Col. Parker’s on his deathbed in 1997 so he tells the tale clear up to one of Elvis’ last Las Vegas shows in 1977. Aficionados clearly do not get tired of the story of the King of Rock and Roll.

And ELVIS is appreciated. The Observer (UK) stated, “Of the actors who have previously tried to bottle Elvis’s lightning-like magic, none has come close to the physical, emotional, electrical energy that throbs through Austin Butler’s titular performance here.” And The Atlantic said, “Through Luhrmann’s lens, Elvis transforms from someone striking and fresh to a relic clinging for relevancy in a changing world. Luhrmann presents the familiar narrative with enough verve to make it feel new.” Even Priscilla Presley, played in the movie by Olivia DeJonge, approved of it. On her Facebook account she wrote, “For those curious about the new film ELVIS, Baz Luhrmann, the director, provided a private screening for me and Jerry Schilling at Warner studios recently. This story is about Elvis and Colonel Parker’s relationship. It is a true story told brilliantly and creatively that only Baz, in his unique artistic way, could have delivered. Austin Butler, who played Elvis is outstanding. Halfway through the film Jerry and I looked at each other and said WOW!!! Bravo to him…he knew he had big shoes to fill. He was extremely nervous playing this part. I can only imagine. Tom Hanks was Col Parker in this film. What a character he was. There were two sides to Colonel, Jerry and I witnessed both. The story, as we all know, does not have a happy ending. But I think you will understand a little bit more of Elvis’ journey, penned by a director who put his heart and soul and many hours into this film.”

RT summed it up – 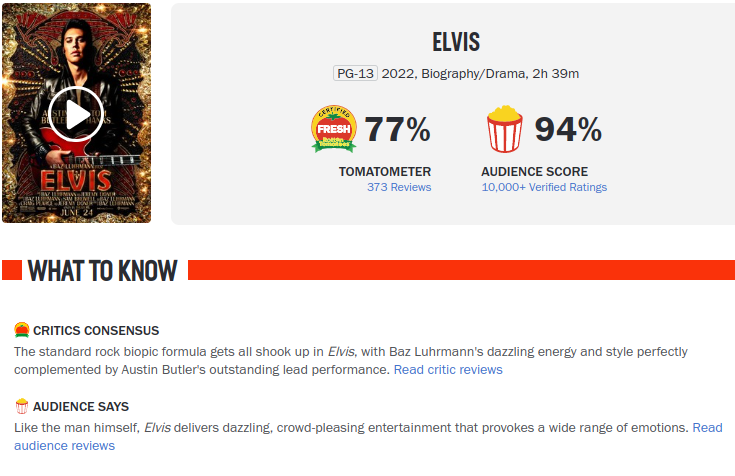 So, what are you waiting for? Find it now playing on HBO Max. If you are a true fan, take the 2 hours and 39 minutes and relive ELVIS.