The retelling of Frank Herbert’s DUNE by Denis Villeneuve was a big epic hit for Warner Bros. both in the theaters and on HBO Max. We’ve already reviewed it shortly after its Same-Day Premiere in 2021. This post is just a reminder that it has just debuted as the Saturday Night Movie on HBO (SATURDAY, MARCH 26). If you haven’t seen it yet through your cable/satellite provider note the listings below: 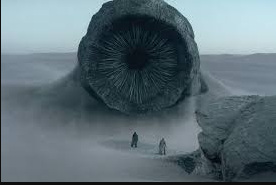 It is an expansive story, as was the thick novel, but at it simplest, it tells of the son of a noble family who travels to a dangerous planet to avenge his father’s death and protect the most precious resource in the galaxy in this visually stunning adaptation of Frank Herbert’s seminal sci-fi novel.

It is a big movie at 2 hours 35 minutes and hard to miss as critics rave it and the Oscars will bestow it some award for sure. It is not just a rehash of David Lynch’s 1984 version either. Obviously, with better FX this production is bolder and more visually stunning. Add solid casting and a better-plotted storyline and DUNE comes to life as a thrilling sci-fi tale. It is a difficult story to tell as Herbert created whole new worlds and societies within the pages of his tome. All of the aspects of the planet Arrakis, like the Sandworms, Spice, the Bene Gesserit and Harkonnen have to be explained and understood within the time frame of a movie. To get it all in, Villeneuve skirted some big points, glossed enough over others and etched out enough of the story to make it come alive. True, DUNE fans won’t like everything about it because of that but it does leave you with the spicey essence of the epic story. 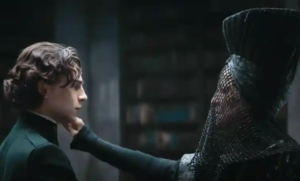 Here is what some critics said. ABC News stated, “Denis Villeneuve’s take on Frank Herbert’s dauntingly complex novel can sputter and flirt with incoherence, but the director and his actors, led by an all-in Timothée Chalamet, find the pow and the poetry in this cornucopia of visual astonishments.” And the Minneapolis Star Tribune put out there, “The result is a movie that seems to move both too quickly (Wait. What are the ramifications of that last conflict?) and too slowly (When are we going to get to the why of all of this?).” RT sums it up thusly – 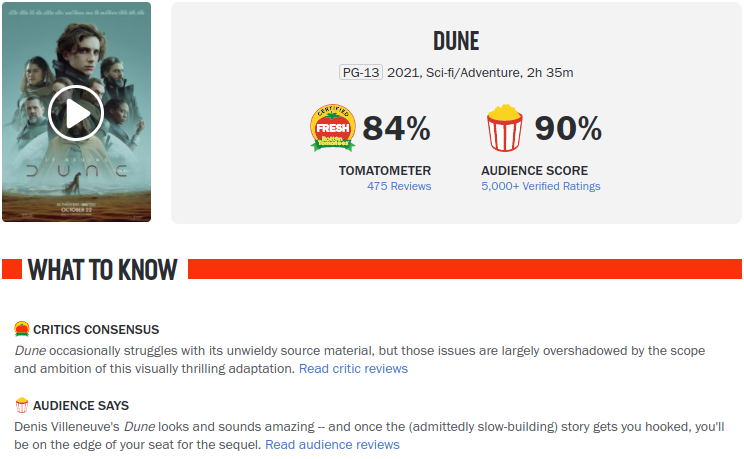 Hey, it is a stunning primer into the epic story that will have unfamiliar dropping their jaws, but read the book, people. If you never picked up one…just read the book.