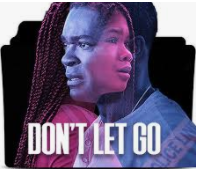 DON’T LET GO is a murder mystery that packs an emotional punch. This riveting film builds breathtaking suspense off a shocking supernatural twist: a detective receives a call from his recently murdered niece. David Oyelowo stars as the lawman who must reach across time to uncover the disturbing truth behind the crime and possibly prevent it. “It’s a fascinating ticking clock” (The Austin Chronicle). Co-starring Mykelti Williamson, Brian Tyree Henry with Storm Reid and Alfred Molina. Directed by Jacob Aaron Estes; screenplay by Jacob Aaron Estes, story by Jacob Aaron Estes and Drew Daywalt.

There you go. It can’t be any simpler than that; he just needs to alter time and save his niece. Any everyday dude should be able to do that, right? The big question is whether that gimmick can hold this story together. That’s where you come in; if you watch the movie you can tell us in the comments below how it all works out. Here is the trailer for a bit of incentive:

Oyelowo is a hard worker if you peek at his resume. You might remember him in HBO’s NIGHTINGALE and FIVE DAYS before that. More recently he has been MLK in Selma and Javert in Les Misérables. He is now front & center in this Blumhouse B-picture as a detective with the chance to stop a crime, even though it has already happened. You’ve got to accept the supernatural tropes to accept his effort. Some critics did and some didn’t. Arizona Republic says – “When it comes to time-travel plots, it’s more surprising and solidly thought through than 90% of sci-fi movies” and the San Francisco Chronicle states – “Oyelowo and Reid have excellent chemistry, as they learn blind faith in each other might be the only way they both survive.” But the Los Angeles Times tells us – “The time-traveling investigation is indeed optimistic, but in reality, and execution, it’s just magical thinking wrapped up in a fussy, overly convoluted plot.” 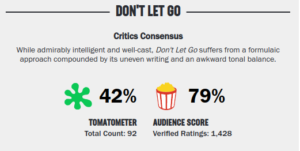