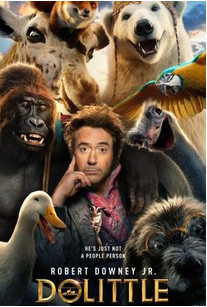 From Halloween on to the end of the year seems to certainly be family time. That is reflected in some of the movies on HBO’s schedule. This weekend you can gather the troops because the Dr. is in the house – the one who can talk to the animals. DOLITTLE is all about the veterinarian will a special connection to the other inhabitants of the planet. This time around Robert Downey Jr. is in the lead.

For those unfamiliar, the character was created by Hugh Lofting for his children and spans 13 books in all. Rex Harrison did a 1967 movie musical and Eddie Murphy even took a turn in 1998. All I can say is, if you don’t know the Pushmi-Pullyu critter then you don’t know Dolittle. At any rate, here are details on Downey’s turn. DOLITTLE is an American fantasy adventure film directed by Stephen Gaghan from a screenplay by Gaghan, Dan Gregor, and Doug Mand, based on a story by Thomas Shepherd. It is inspired by Lofting’s second Doctor Dolittle book, “The Voyages of Doctor Dolittle.”

It seems the plot is simple enough; Dr. Dolittle (Downey Jr.) is called to heal Queen Victoria (Jesse Buckley) from an ailment that requires a special herb that only he can obtain. He has aid, of course, from a long list of animal friends. They are – Emma Thompson as Polynesia, a wise and brave macaw; Rami Malek as Chee-Chee, a shy but noble gorilla; John Cena as Yoshi, a happy-go-lucky polar bear who wears a hat because he is always cold; Kumail Nanjiani as Plimpton, a mischievous and critical but well-meaning ostrich who wears striped stockings; Octavia Spencer as Dab-Dab, a helpful but deluded duck with a metal leg; Tom Holland as Jip, a loyal dog who wears glasses; Craig Robinson as Kevin, a cheeky-chippy squirrel with a bad attitude; Selena Gomez as Betsy, a friendly giraffe and Marion Cotillard as Tutu, a French fox who is best friends with Betsy. What, no Pushmi-Pullyu in sight?

That all leads to the question of whether this crazy multi-species ensemble is any fun. It was not well received it seems. Times U. K. says “It’s symptomatic of an awkward, unwieldy movie that has lots of material to show you and lots of surface distractions, but nothing at all to say.” The Wall Street Journal stated, “A production that achieves the dubious distinction of combining too-muchness with not-enoughness: too much tumult and chaos, not enough dramatic focus; too many animals with clever names spouting glib one-liners, not enough simple human feeling.”

So, the trailer is the only bit of this movie with some feeling in it? Take it in and weigh on whether the kids will at least enjoy it and the whole film when it debuts on HBO, Saturday, November 13 at 8:00pm.