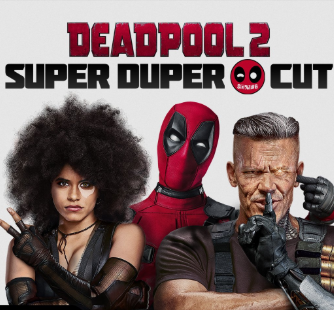 HBOWatch Editors were not able to line-up a writer to review the R-rated superhero flick DEADPOOL 2, but that doesn’t mean that we don’t want to draw your attention to it. Actually, I guess it is the “Super Duper Cut Unrated Version”; I guess that means more raunchy talk per minute delivered by the anti-hero of the day or at least of the Marvel universe.

His action antics have done quite well for himself and the actor who plays him. Ryan Reynolds returns as the Merc with a Mouth for another tussle. This time out, Wade Wilson (Reynolds) is out of sorts upon the loss of his girlfriend Vanessa (Morena Baccarin). His mission is to curtail the destructive Russell or Firefist (Julian Dennison). But the time-traveling cybernetic soldier Cable proves the bigger threat when he arrives to prevent the future Firefist from taking him out. In order for Wade, as Deadpool, to face the challenge he assembles X-Force. That offers us Domino (Zazie Beetz), Bedlam (Terry Crews),  Shatterstar (Lewis Tan), Zeitgeist (Bill Skarsgard) and Vanisher (Brad Pitt). If that is not enough superheroes for you Colossus is back (voiced by Stefan Kapičić) and some X-Men characters appear also.

Under the direction of David Leitch (John Wick, Atomic Blonde) the movie packed a punch. It was released in the United States on May 18, 2018. It grossed nearly $785 million worldwide, becoming the ninth highest-grossing film of 2018, as well as the second-highest-grossing R-rated film and the highest-grossing X-Men film.  From the San Diego Reader comes this – “Instead of seeking to top the over-the-top antics of the first film, [both director and star are] content to simply groove with what they’ve already established and just have fun. The result is less exhausting and more entertaining.” But leonardmaltin.com says – “Nearly everything about the original Deadpool was fresh and funny, from the opening credits to the parody of Marvel movie finales. Deadpool 2 suffers the fate of so many sequels: we’ve seen its best ideas before.” And RT says –

Superhero fans will settle in for this one again for sure despite what the critics say and though I am not as vicious as Bill Maher in attacking comic book fans I will pass on this one as I just grew out of this genre a long time ago. But YOU GO FOR IT when Deadpool 2 debuts on HBO Saturday, February 16 at 8:00pm. After all, it is the Super Duper Cut Unrated Version.