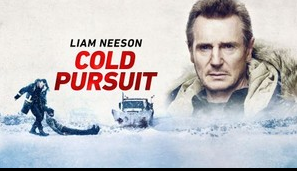 The Editors could not line up a writer to review COLD PURSUIT but that does not mean we don’t want to draw your attention to it. It is a 2019 action thriller directed by Hans Petter Moland (in his Hollywood debut) from a screenplay by Frank Baldwin. The film stars Liam Neeson, Tom Bateman, Tom Jackson, Emmy Rossum, Domenick Lombardozzi, Julia Jones, John Doman, and HBO fave Laura Dern. It is an official remake of the 2014 Norwegian film In Order of Disappearance (Kraftidioten), also directed by Moland, and follows a vengeful snowplow driver who starts killing the members of a drug cartel following the murder of his son. the official plotline goes like this – Quiet family man and hard-working snowplow driver Nels (Neeson) is the lifeblood of a glitzy resort town in 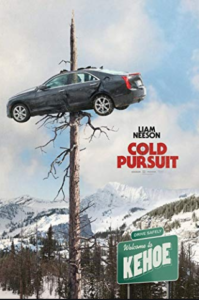 the Rocky Mountains because he is the one who keeps the winter roads clear. He and his wife (Dern) live in a comfortable cabin away from the tourists. The town has just awarded him “Citizen of the Year.” But Nels has to leave his quiet mountain life when his son is murdered by a powerful drug lord. As a man who has nothing to lose he is stoked by a drive for vengeance. This unlikely hero uses his hunting skills and transforms from an ordinary man into a skilled killer as he sets out to dismantle the cartel. Nels’ actions ignite a turf war between a manically unpredictable gangster known as Viking (Bateman)  and a rival gang boss named White Bull (Jackson). Justice is served in one final spectacular confrontation that will leave (almost) no one unscathed. Here is the trailer –

Yeah, I forgot to mention one other big co-star in this thing. Check out that sharp-bladed monster-size plow truck. It no doubt does damage. In fact, all the damage wrought in this work seems to be a highlight as does the dark humor throughout. Variety states – “By pumping up the darkly comedic undertones, augmenting the frigid chill of the original, Moland’s terrific, riveting picture distinguishes itself from other rote remakes.” And The Wrap says – “Both the action and the comic elements in “Cold Pursuit” work reasonably well. Neeson can do justifiable homicide in his sleep by this point, but it’s still fun to watch him dispatch goons and scumbags.” The London Evening Standard says, however – “After a zingy, tight first hour, the concision gives way to flab. The executions become a touch mechanical, the gags start to feel forced, and the avalanche of lavishly nicknamed baddies loses distinction.” What do you say? Do you agree with RT perhaps?

Find COLD PURSUIT debuting on HBO SATURDAY, October 5, 2019, at 8:00 pm and appearing across the platforms.