Hey, I don’t have time to watch movies sad to say, but if I did, I’d watch BOOGIE (and still just might one day) and that statement holds true just because of the trailer. So much so, that the trailer landed at the top of this post. What caught me, you ask? One, is certainly the track from the late Pop Smoke and I’m not big on Rap; two is the Chinese-American representation here and I’m not remotely Asian; add to it that the trailer just packaged the story so well. Yeah, I just might watch it one day and you’ve got a chance to watch it also as it is the HBO Saturday night movie of the week. 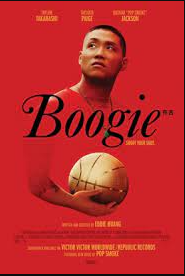 From acclaimed writer, producer and restaurateur Eddie Huang comes this work, his directorial debut. It is the coming-of-age story of Alfred “Boogie” Chin, a basketball phenom living in Queens, New York, who dreams of one day playing in the NBA. While his parents pressure him to focus on earning a scholarship to an elite college, Boogie must find a way to navigate a new girlfriend, high school, on-court rivals and the burden of expectation. Written and directed by Eddie Huang. Starring Taylor Takahashi, Taylour Paige, Pamelyn Chee, Mike Moh, Jorge Lendeborg Jr., Alexa Mareka, Perry Yung, and Pop Smoke.

Huang (Fresh Off the Boat) seems to pack an interesting story of cultural clash, hot sports and life lessons. Taking on “Boogie” is Takahashi, who had prior experience in b-ball but none in acting; he was on Huang’s payroll and was given the shot and, at least from the trailer, seems to be able to do it. One of his rivals on the court is a character called Monk played by Bashar Jackson. He is also known as Pop Smoke whose music you hear in the trailer and throughout the film. He died of gunshot wounds in L.A. in February 2020 as a result of a home invasion robbery. Taylour Paige (she was in an episode of BALLERS; Ma Rainey’s Black Bottom) plays Eleanor, Boogie’s lady of choice.

But what do the critics say of this cast and the movie?  Well, Variety stated – “Eddie Huang’s directorial debut about a Chinese American basketball player trying to balance athletics, romance and parental expectations compensates for its narrative shortcomings by conveying a strong sense of its milieu’s culture and customs…” but the Tribune News Service says – “While “Boogie” has much of Huang’s urban Asian American style and swagger, the script is, unfortunately, a missed shot.”

Out got-to Rotten Tomatoes sums it up this way –

43%, due to lack of tone? Unless the trailer doesn’t fully represent the whole movie because that clip sure as hell had tone. Decide for yourself if you are so inclined when BOOGIE debuts SATURDAY, NOVEMBER 13 @ 8:00pm. Also airs on the following dates and on HBO Max.