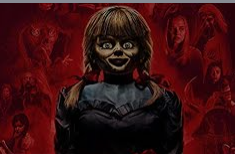 Horror has a homecoming when a young girl lets the demonic doll “Annabelle” out of her cage in this nightmarish third film from the “Annabelle” series. Renowned demonologists Ed and Lorraine Warren have kept the doll locked up until Annabelle’s evil is reawakened and she sets her sights on the Warrens’ 10-year-old daughter. “Excellent, uncomplicated house-of-horrors fun” (The Globe and Mail). Starring Mckenna Grace, Madison Iseman, Katie Sarife with Patrick Wilson and Vera Farmiga. Directed by Gary Dauberman; screenplay by Gary Dauberman, story by Gary Dauberman & James Wan.

And with this, we can say the whole Conjuring Universe is holding up strong enough as a horror franchise. It serves as a sequel to 2014’s Annabelle and 2017’s Annabelle: Creation, and as the seventh installment in the franchise overall. It seems the demonologists had the creepy artifact all locked up and subdued but in order to keep the franchise alive the doll needed to break free and wreak havoc once again,

Prior to the release of the movie in June 2019, Gary Dauberman commented on the possibility of another film in the Annabelle series: “I didn’t look at this process … going, ‘What other stuff can we absolutely spin-off into other movies?’ [It’s about] what works for this movie, and then if people seem to dig it, then we’ll go from there.”] Producer Peter Safran also commented on the possibility, stating that they will continue to develop and create films “as long as [they] keep having original stories to tell. The moment that you start repeating yourself and really diluting the good will that exists out there, then it’s the beginning of the end.”

So, is there still life in this thing? Only big horror fans can tell us because the rest of us stay away. But I’m just repeating what Rotten Tomatoes has surmised: 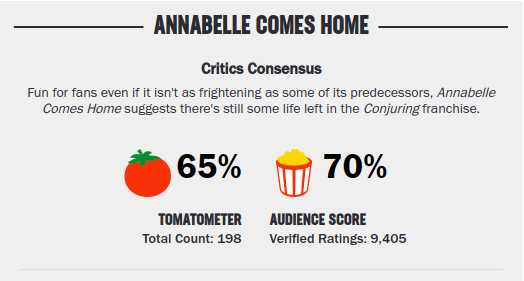