Hey, if you watched SEE HOW THEY RUN last month you just might want to check out AMSTERDAM. They’re similar in that they both cast a slew of familiar faces and they both address murder in comedic fashion. The former title strongly used Agatha Christie’s style of storytelling whereas the latter title digs around in historic facts with David O. Russell at the helm. 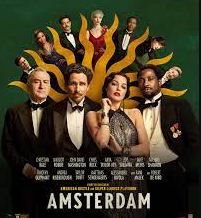 In fact, not only was AMSTERDAM directed by Russell but it was also written and produced by him. The work starred Christian Bale, Margot Robbie and John David Washington and features Chris Rock, Anya Taylor-Joy, Zoe Saldaña, Mike Myers, Michael Shannon, Timothy Olyphant, Andrea Riseborough, Taylor Swift, Matthias Schoenaerts, Alessandro Nivola, Rami Malek, and Robert De Niro. I told you it packed a cast! Together they give us the story of the Business Plot, a 1933 political conspiracy in the US, and follows three friends—a doctor, a nurse, and a lawyer—who are caught in the mysterious murder of a retired US general.

The alleged political conspiracy in question happened in 1933. It was an attempt to overthrow the government of President Franklin D. Roosevelt and install someone named Smedley Butler as dictator. Note, however, that it was only ‘alleged’ as no one could confirm or deny the plot was actually ever in play. But could it make a good movie? We find out via the actions of the three friends who survived WW1; Bale is the doctor; Washington becomes the lawyer and Robbie is the nurse. After the end of the war, the three move to Amsterdam, where they start living together and become close friends until Burt returns to New York City to be with his wife. Harold, who has fallen in love with Valerie and begun a tenuous romantic relationship with her, also departs to New York to fulfill his aspirations of becoming a lawyer. Fifteen years later, they meet again and the endangered general they encounter, played by De Niro, turns out to be the want-to-be dictator! Thus, they get plopped into the Plot. Just how I can’t say but seek out the movie and all will be revealed.

To be honest, though, the movie served up a big bag of reviews. On one hand, it seemed many liked its characterizations, cinematography, costume, production, and score. While on the other hand, the screenplay and direction led to something to be desired. Our go-to summed it up this way – 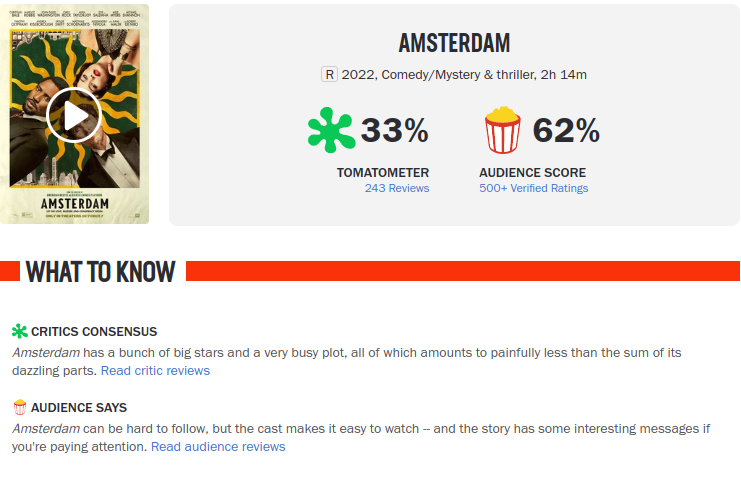 AMSTERDAM at 2 hours & 14 minutes, rated R, can be found on HBO Max. It debuted on the HBO channel on Saturday, December 10.