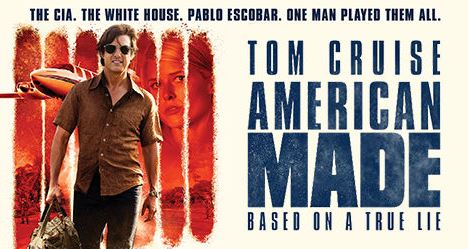 HBOWatch Editors were not able to line-up a writer to review the Tom Cruise actioner AMERICAN MADE but that doesn’t mean that we don’t want to draw your attention to it. From the director of The Bourne Identity and Edge of Tomorrow comes this wildly entertaining adventure based on a true story. Tom Cruise is Barry Seal, an airline pilot who avoids jail time for smuggling by agreeing to work for the CIA, but soon finds himself mixed up with ruthless drug cartels and the Iran-Contra affair.

This is clearly one of those movies where Tom Cruise wanted to set himself apart from the action heroes he has played in movies like Valkyrie, Jack Reacher and the Mission: Impossible franchise. He is not a hero here but a boldly arrogant, audacious scum criminal type duping us all and running drugs under our noses. Barry Seal is not a character to root for. Now, personally I don’t care for Tom Cruise (I think the last film of his I saw was A Few Good Men back in the ‘90’s) so it is hard for me to root for him in this role, but Crusie fans might appreciate his stint in this movie as he changes up for this character role.

Kenneth Turan of the Los Angeles Times said it “is a smart, nervy film, a very modern entertainment made with energy, style and a fine sense of humor that keeps us amused until gradually, almost imperceptibly, the laughter starts to stick in our throats.” meaning the laughter sticks upon the realization, this dope duped the country. But Sam Adams of Slate stated, “Barry is the closest thing Tom Cruise has played to a regular Joe in more than a decade, and the part isn’t a snug fit.” 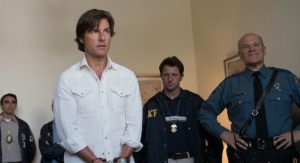 Good or bad in the role Cruise gives us a story that takes a look back at the Iran-Contra issue, the big Medellin drug cartel and the chutzpah of one punk hustler. Of course, with any movie made from true events you always wonder about the historical accuracy of such a work and just how much of it was tweaked for cinematic purposes. Domhnall Gleeson plays Monty Schafer, the CIA operative who turns a blind eye to what Seal is crossing the border with;  Sarah Wright Olsen is Seal’s wife Lucy and the movie also features Jesse Plemons and Caleb Landry Jones. The 1-hour 55-minute flick is directed by Doug Liman (TV’s Suits and Jason Bourne) from a Gary Spinelli (upcoming Chaos Walking) script.

Make your own decisions as AMERICAN MADE plays out across HBO’s platforms. It debuted Saturday, June 09 at 8:00pm.