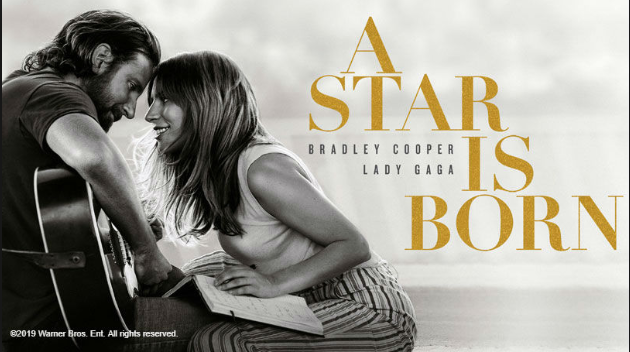 HBOWatch Editors were not able to line-up a writer to review this romantic drama laden with music but that doesn’t mean that we don’t want to draw your attention to it. Right from the start, I’ve got to say two thinks about A STAR IS BORN. First is that I personally never did care for this overused premise, but now that I ‘ve got that out of the way I won’t harp on the point. The second is that this movie is the third rehash of this plot as if every few decades someone thinks it needs a timely do-over. This version, however, was lauded as a good retelling, but who needs it?

Just in case you’re curious it all started with the original movie from 1937. It starred Janet Gaynor as an aspiring Hollywood actress opposite Frederic March. In 1954 it was turned into a musical with Judy Garland, with the character now a singer, and James Mason in the roles. A few decades later in 1976 Barbra Streisand and Kris Kristofferson had a go at it with the male role as rock & roll singer. Now in 2018, it is Lady Gaga and Bradley Cooper’s take on the tale. The premise throughout all four movies holds the same – artists fall in love as her career takes off just as his is on the wane.

In the latest version, Cooper makes his directorial debut snagging an opportunity to film scenes at the 2017 Coachella Festival. The film received numerous accolades, including eight nominations at the 91st Academy Awards, among them Best Picture, Best Actor (for Cooper’s role of country singer Jackson Maine)), Best Actress (for Lady Gaga’s role as Ally) and Best Supporting Actor (Sam Elliott in the role of Bobby Maine, half-brother & manager to Jackson). Andrew Dice Clay, Anthony Ramos and Greg Grunberg also appear. The exact plot this time around – Jackson “Jack” Maine, a famous country music singer privately battling an alcohol and drug addiction, plays a concert in California. His main support is Bobby, his manager and older half-brother. After the show, Jack visits a drag bar where he witnesses a performance by Ally, a waitress and singer-songwriter. Jack is amazed by her performance, and they spend the night talking to each other, where Ally discloses to him the troubles she has faced in pursuing a professional music career. He helps shape her craft, build her confidence and even win her heart and watches her rise in popularity as his career and more comes to an end.

Whether I like it or not doesn’t matter, but here is what Rotten Tomatoes posted –

Discover the classic story retold for today. A STAR IS BORN debuts on HBO Saturday, June 8 at 8:00pm.