HBOWatch Editors were not able to line-up a writer to review LIFE OF THE PARTY, but that doesn’t mean that we don’t want to draw your attention to it. The reasoning behind the missing review could be because the writers have been easing up over the Holidays or perhaps it is because they, like the editors, are not Melissa McCarthy fans. Regardless, we will give you the basics and you can watch it on HBO & the sites at your leisure. It debuted SATURDAY, DECEMBER 28 at 8:00pm.

The plot goes like this – When her husband suddenly dumps her, longtime dedicated housewife Deanna turns regret into re-set by going back to college – landing in the same class and school as her daughter, who’s not entirely sold on the idea. Plunging headlong into the campus experience, the increasingly outspoken Deanna — now Dee Rock (OH PLEASE, THAT IS STUPID!)– embraces freedom, fun, and frat boys on her own terms, finding her true self in a senior year no one ever expected. 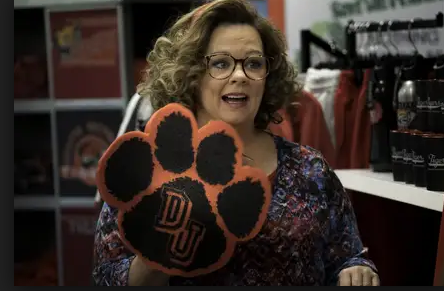 This 2018  comedy is directed by Ben Falcone and written by Falcone and Melissa McCarthy. It is the third film directed by Falcone and co-written by the pair, following Tammy (2014) and The Boss (2016). Again, having not seen it, I don’t know if this is a movie claiming that it is not too late for older people to go back to school and achieve their goals or whether it is a movie that just shows Deanna just wanting to be hip, cool or popular for the first time or just wanting to do it all over again. It would be a lot more positive of a movie if the course was the former premise as opposed the latter. This being a McCarthy movie, however, I suspect the latter.

Nathan Osborne of Film Inquiry says, “more fun than funny, Life of the Party may be one of the weaker comedies to come from Melissa McCarthy in a leading role, but it’s entertaining, pleasant and harmless enough if you’ve been taken by McCarthy’s previous work with Ben Falcone.” And Daniel M. Kimmel of the New England Movies Weekly stated it is “…an uneven mess, but for a Melissa McCarthy vehicle, it’s a vast improvement over most of her previous movies.” As always we include what our favorite go-to aggregator says –

Care to defend Melissa McCarthy & LIFE OF THE PARTY? The comment section is yours. Or if you haven’t seen the movie and want to review it for us you can do that below as well.