X-Men: Apocalypse is the culmination of all the wrong-headed moves that have kept the X-Men movies from becoming more than 2nd string superhero movies. Some of them have been good, some of them have been downright bad, but none of them have ever really hit that high mark you might find in the Marvel/Disney cinematic universe. The problems stem from too many characters left undeveloped, uninteresting action, overly complicated plots, taking themselves waaaay too seriously, and coasting on the charisma of one character that rhymes with Schmulverine and the actor whose name rhymes with Schmugh Schmackman.

They have done some things right, though. Framing mutants as a persecuted minority was the original intent of the series, so running with a gay youth theme all the way back in 1999 (seriously this started 1 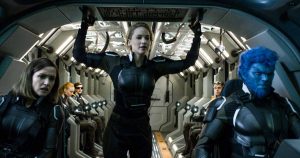 8 years ago now) was a seriously great move (rewatch the scene in X2 where Bobby “comes out” to his parents if you don’t believe me). Hugh Jackman was a really good choice for the role. Ian McKellan and Patrick Stewart are phenomenal playing off one another when they actually get the chance to, and it’s terribly disappointing they didn’t get more opportunities to. There’s some other stuff, but so many of the good decisions in these movies get bogged down by the boneheaded, tone-deaf, and uninspired.

And unfortunately, none of the good stuff is on display here. Apocalypse moves between treading water and treading boring nonsense. Thanks to the events of Days of Future Past, we now have another Quicksilver sce—I mean Apocalypse, the legendary mutant forebearer of ancient Egypt has awoken. His godlike power gives him the ability to reshape the Earth in his image, and he wants to recreate it as a place where only the strong survive. To that end, he recruits four horsemen (of the Apocalypse) and sets about bringing ruin upon the Earth. That is if Charles Xavier and his crew of misfit teenagers can’t stop him first. Also, Mystique is here and she’s an important character because Jennifer Lawrence is too popular to let go from this series.

As I stated above, too many characters spread too thin. It’s so hard to get invested in anything that’s happening because this movie layers bizarre character choices on top of dull character moments. Why should I care about Cyclops having problems at school if we never actually get to see him in his element there? Why should I care about Angel having his wing torn in his fight with Nightcrawler if he immediately joins up with Apocalypse anyway? In fact, why does Apocalypse choose Angel in the first place? In the comics he was a horseman at one point, but if Apocalypse is all about the strong surviving and Darwinism then from the outset Angel was not a superior choice, just being a guy who has wings in a world where there are telekinetics and people who can control fire. 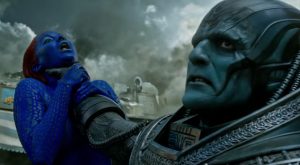 For another thing, Apocalypse himself is such an overpowered villain that the X-Men’s only lucky break is that he’s all ego and no intelligence. The mark of good characterization is in the way characters talk about each other, and suffice to say Apocalypse spends the entire movie talking about himself. His powers are inconsistent and all over the place. Here’s a character who could break down every X-Man to their atoms and scatter them in the wind, but only chooses to punch them because… well, then there wouldn’t be a movie? So you know you’re getting a quality feature when things have to get dumbed down to justify its own existence.

Maybe it wouldn’t be so bad if this movie didn’t take itself so impossibly seriously without actually having any weight behind any of it. In one scene, Apocalypse promises to cleanse the world of its sins as he ceremonially destroys the remnants of the Auschwitz Concentration Camp (seriously), but Oscar Isaac plays him so flatly and the dialogue is so inane that it can’t even be unintentionally funny. Most scenes play with that feeling that makes you cock your head to the side in confusion like you’re trying to figure out what your five-year-old nephew finger painted before he lets you know it’s a kangaroo and you politely nod and smile.

I wish these movies wouldn’t take themselves so seriously. If nothing else, they might have been more fun and had more opportunities to be creative with the choreography to the fights. Maybe sentinels could have arrived sooner and looked less like well-armed ventilation ducts. Hugh Jackman could have done more with his role than one final great movie (Go see Logan if you 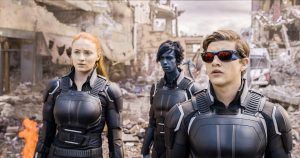 haven’t yet). Instead, they aim too high and have to course correct the continuity with each proceeding movie. And at this point, I hope they close out the series while a nominally great one is in theaters and end on the highest note they could hope to achieve.

X-Men: Apocalypse is a movie that dares to aim high but can’t carry its own weight before getting off the ground. Too much doesn’t make sense or doesn’t pay off. Some scenes come out of nowhere or don’t hold any emotional/narrative weight. There’s more than one bizarre tonal shift because certain scenes needed to be shoehorned in that immediately canceled out any gravitas that might have been building. The bad guy doesn’t work for so many reasons, not least of which is his plan doesn’t make sense. I’d say skip it, but odds are if you didn’t see it in theaters you weren’t going to seek it out here.