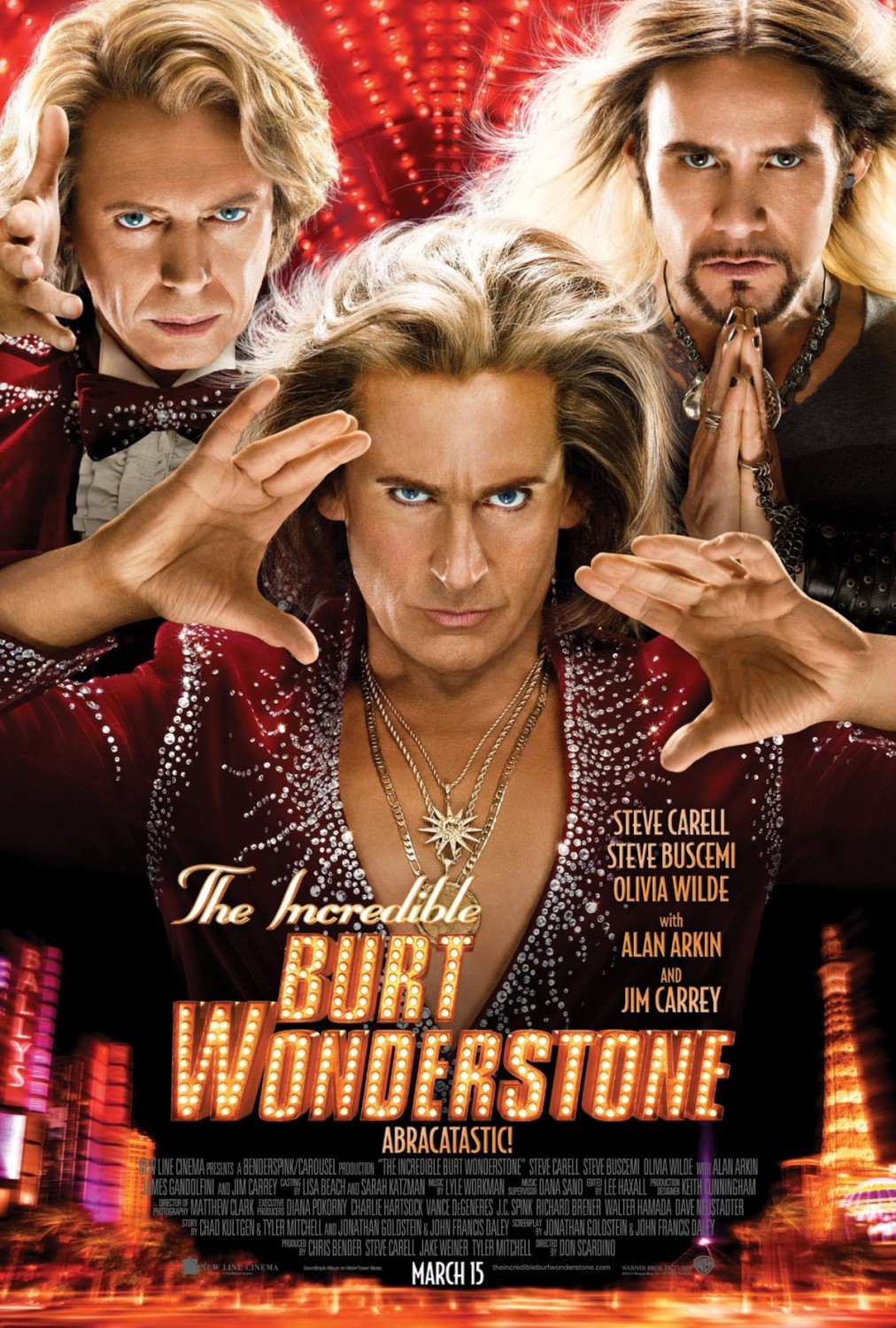 The standouts of the cast are Buscemi, who captures the screen with his awkward portrayal of the incredibly awkward Marvelton and Arkin as Rance Holloway, who is both hilarious and sarcastic as only Arkin can be.  The movie vacillates between a few entertaining moments, Carrell being more and more out of place in the world than in “Anchorman,” Carrey performing magic stunt shows that are simply creepy, and the charm that Buscemi musters as he plays up his famous mug and his character’s love of magic. Wilde also adds some depth to the show at times, but she doesn’t seem to be well used. The movie, overall, is fair/so-so in my opinion.

What feels most awkward about the movie isn’t the plot, which can be ponderously slow and quite silly, but the casting: Carrell and Carrey go so far out of their way to be funny that their characters are strained. While that may be intentional, it, in my opinion, makes the movie a bit difficult to watch at certain points. Overall, the plot is a tired one in that it’s about a man wanting to redeem himself for friendship and love. Perhaps the plot wanders because the movie took seven years to complete. Since its inception in 2006, different writers and directors came and went, which always adds and takes away from the original concept and, usually, the finished product. Still, it is a decent movie with some funny bits, some interesting bits, and some rolling your eyes at the silliness bits. Why not give it a try?

As I said, the bright points of the movie are Buscemi and Arkin; at one point, Buscemi’s Marvelton is told he’s too homely for a magic act, and he says that he’s not offended. Only Buscemi could pull off something like that as smoothly as he did. For everyone who thinks he’s only good as serious Nucky, then take a look again: he’s quite deft at comedy. Arkin is classic as basically himself. He’s sassy, sarcastic, and retains his wonderful dry sense of humor. Given that the show takes place in Las Vegas with people in costumes everywhere, Arkin manages to give Holloway a great “classic” magician feel while still dripping entertaining vitriol.

There are several not so bright points, but the main one that bothers me is that Carrey’s character is called “The Brain Rapist” and uses “#rapist” to promote himself. That’s just wrong and offensive and beyond off-putting to me. I understand – his character’s Criss Angel-ish act focuses on freaking out a person’s mind and all that – but it’s just plain wrong. “#rapist”? Really? Aside from that (and his character overall, who doesn’t mind turning deliberate self harm into a “magic” act or stuffing a puppy down Carrell’s pants), the movie is decent. Will I watch it again? Perhaps. Should you tune in and watch it for yourself? Why not! It’s a good way to spend a Saturday night. Buscemi is great, Arkin is delightful, and the magic they perform isn’t CGI – they all appear to be real magic tricks, which I didn’t expect but was happily surprised to see.

“The Incredible Burt Wonderstone” didn’t fare too well in the critical reviews. Rotten Tomatoes gave it a 36%, but the audience reviewies on the site gave it a 34%. On Fandango, both viewers and critics rated it “So-So;” the average critic score was 44%. Metacritic gave it a better rating of 44%, also. Lastly, IMDB.com ranked it at 5.9/10. On a budget of $30 million, the film earned $27 million worldwide. Don’t take the critics at their word, though; tune in on Saturday, January 25th, and let us know what you think about Steve Carrell & Co. in “The Incredible Burt Wonderstone.”