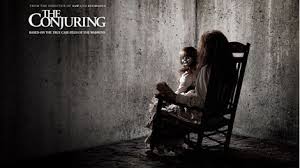 It’s difficult to discern a good horror movie in the endless, barren wasteland the genre has been reduced to. The ability of Hollywood studios to churn out fast and cheap films that can quickly turn a profit makes it harder and harder to find something remotely decent. In the last decade two franchises have completely overshadowed the rest; Saw and Paranormal Activity. Both of which are very good ideas for low budget productions which spiraled out of control from rampant success, offering audiences multiple sequels of consistently declining quality. After years of the bland yet successful formula a new film appeared; Insidious. Combining classic horror style with a modern aesthetic it was potentially the sign of an emerging renaissance for horror. Finally moving away from jump scares and lazy screenwriting to a more crafted atmosphere that allows an audience to get swept up in the panic. It was a breath of fresh air after all the torture porn.

Capitalizing on the new style, here we have The Conjuring, a movie that carries itself so similarly to Insidious, it even stars the same actor, Patrick Wilson. After moving into their new home, the Perron family starts receiving visits from unwelcome guests; guests who may see them as the unwelcome intruders. Quickly moving past disbelief, the family contracts paranormal investigators Ed and Lorraine Warren (Patrick Wilson and Vera Farmiga) to figure out just what is happening in their house and what they can do to expel the danger. But as they draw closer to unraveling the history behind the seemingly normal estate, how far will the presence go to keep its dwelling unperturbed?

The pacing is slow, the acting is good, the atmosphere is well maintained throughout, but what drags this movie down is the dialogue. Unfortunately, like Insidious, the people who under any other circumstance would be called crazy are the ones everyone goes to for help. The way everything is so matter-of-factly explained despite being completely ridiculous on its face makes the film much more engaging if you get swept up in the plight. Otherwise, it does a good job of preventing that from happening. This isn’t a story of people coming to believe in the other-worldly, Ed and Lorraine

hold presentations at Universities and get interviewed by journalists, all with accompanying evidence to prove what they are doing is scientific. No one throughout the movie, even during Ed’s first consultation concerning a possessed porcelain doll, stops to ask if any of this is legitimate. As the explanations get wackier, it gets harder to go along with the story. There isn’t a hint of genuine skepticism through the movie, and ironically that makes it all harder to believe.

Even for all the problems mentioned, the movie does some things right. For example, a scene where a ghost can be seen in a mirror is slow and silent, a far cry from the usual screech of violins almost telling the audience “BOO! WASN’T THAT SCARY!?!!!!!”. The way the movie tries to shock the audience doesn’t always work. Jump scares, where a moment of silence and slow camera movement is interrupted by a quick, loud noise and/or image isn’t what makes good horror. This may boil down to opinion, but proper scares aren’t drawn out ways to startle an audience. Doors swinging open and closed of their own accord can surprise and porcelain dolls are creepy as hell, but The Conjuring doesn’t offer much more than surface level scares designed to cater to an audience that craves shock over dread. Sitting in a dark basement with only a box of matches to light the room, though contrived, is a great way to create suspense for everything that we can’t see in the growing dark. A girl bonking her head into a wardrobe while she sleepwalks isn’t all that enticing.

That’s one of the major problems with the climax to these movies. Even in Insidious, the final act misses the landing because horror films have to paradoxically try to scare you even more while keeping your eyes glued to the screen. Of course it never works because the excitement always outweighs the fear. Aside from a few potentially startling moments, the fear is drained from the scene, and the clunky dialogue from the beginning of the film starts to shine through again if you aren’t along for the ride.

I guess it depends on taste. If you like horror movies, then this will definitely float your boat. For everyone else, this introduction to the genre isn’t likely to sway you in any direction. An understanding of the tropes and clichés involved in writing a house-based horror story lends a sense of predictability to all the actions contained therein. The film’s mystery is what drives any sense of fear the audience might have, but as the story goes on and more things are learned the fear goes away as it’s replaced by understanding. It’s the crutch of all horror movies. Hopefully, with the massive success this film saw at the box office the genre will move in the right direction to slowly alleviate that problem. Tangent aside, despite its flaws I would say that it’s worth seeing The Conjuring simply for the fact that it isn’t a completely stupid horror movie, unlike a lot of its modern counterparts. Watching is definitely not a waste of time.

Maybe this little tease will help you decide.

If you liked that review, Marc’s got a blog! Check it out kinocabal.blogspot.com for more insights and critical analysis of movies and TV shows!