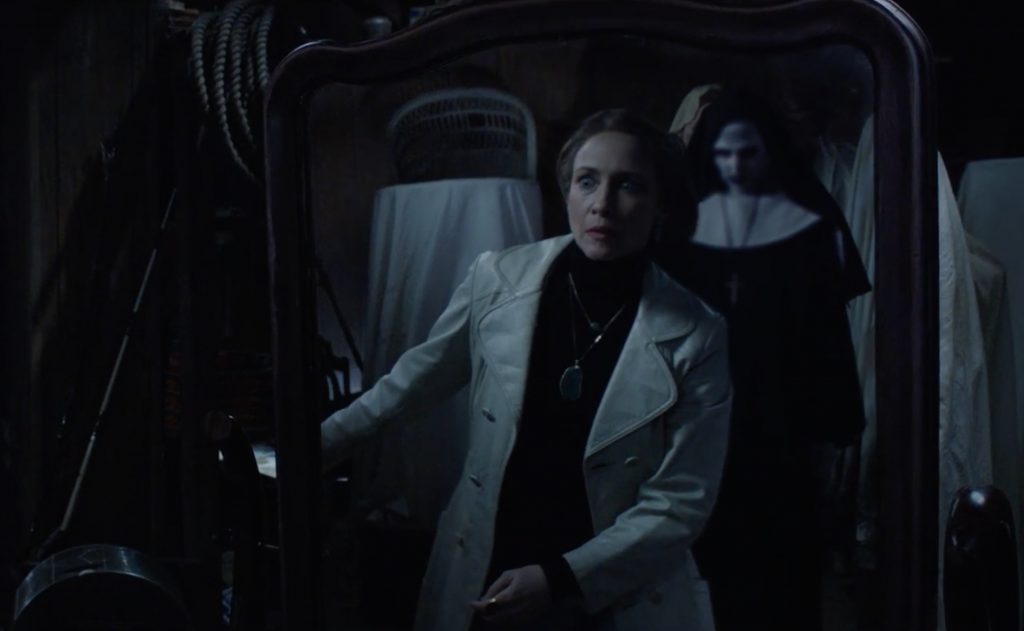 Real life husband and wife Ed and Elaine Warren became famous for investigating high-profile cases of the paranormal, most notably The Amityville case. In their 2013 film, The Conjuring, director James Wan and writers Chad and Carey Hayes focused on the Perron family haunting in Rhode Island. After sitting out the 2014 spinoff prequel film Annabelle, Wan and the Hayes return for The Conjuring 2, once again focusing on the Warrens. This time, Ed and Elaine (played by Patrick Wilson and Vera Farmiga, pictured) are called to the U.K. for a case that would later be known as The Enfield Poltergeist. 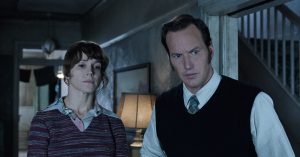 The poltergeist activity centers on the Hodgson family home. Peggy (Frances O’Connor) is a single mother of four and head of the household. Her second child Janet starts to sleepwalk and have visions of a man sitting in the family’s tv room. As the situation progresses, Janet begins to exhibit signs of possession. The Warrens are contacted by their Church to look into the case. At first, Elaine is hesitant, given that the Amityville case had left her with a vision of Ed’s death. Eventually, however, she agrees to take on the case, in the hopes of helping the family.

As a lifelong fan of horror, the original Conjuring film came as a complete surprise and delight. It was a film with quality actors and a gift for careful pacing. The prequel Annabelle was, in turn,  a let-down, one which felt like a rushed cash-in, rather than a carefully crafted extension of the story. When the team that worked on the first film came back for The Conjuring 2, I looked forward to a resurgent entry in the franchise, and I was not disappointed.

Reprising their roles as the Warrens, Wilson and Farmiga bring a gravitas and warmth to the characters that enhance the emotional stakes of the film. Theirs is a union of love, but also one built on a duty to help wherever they are needed, and Elaine’s fears for her husband and child bring an added tension to the already complicated Hodgson case. True to form, Frances O’Connor is solid as Peggy, whose child is constantly tormented and always doubted by those around her. As the afflicted child, young actress Madison Wolfe delivers an outstanding performance. If I had one complaint, it’s that the other children aren’t as well established as Janet, and they are not given much to do. For their part, Wan and the team also deliver behind the scenes, building the scares carefully and effectively, with the right beats in between. Unlike other horror teams, they understand that the build-up and the staging are the most crucial components of a scare. Their imagery and design also linger in the viewer’s mind. The juxtaposition of the demonic and otherworldly in mundane settings like the family living room makes quite an impression.

If you’re a fan of horror, I highly recommend The Conjuring 2. Though it builds on the characters from earlier films, it does stand alone and can be followed even without knowledge of its predecessors. It premieres on HBO and its platforms on  Saturday, June 17th at 8:00pm.