From the time I signed up to take the review to the time it was to watch the film, I had completely and utterly forgot what the film was about and who was in it. With this stunning feat of memory loss, I had zero expectations about what I was going into, and that worked very nicely.

Starring Melissa McCarthy as Michelle Darnell, we get a woman who has been down and out her whole life. Bounced around from home to home and back again, she was used to having no one to count on but herself, and for a really long time that worked for her. Michelle fought her way to the top and intended on staying there.Unfortunately, insider trading isn’t really the way to go.  After a brief stint in jail, Michelle seeks out the only person that will even bother talking to her: an old assistant Claire, played by Kristen Bell. With nowhere else to turn, Michelle moves in with Claire and her daughter Rachel (Ella Anderson). Inserting herself into their lives, Michelle takes over Rachel’s girls’ group the Dandelions and finds a way to make the big bucks again.  But with the money rolling in, can Michelle stay true to her new family? Or she is always intent on looking out for number one: herself?

Besides McCarthy and Bell, the cast includes Kathy Bates, Peter Dinklage, Tyler Labine, and Cecily Strong. Both McCarthy and Bell’s husbands, Ben Falcone and Dax Shepherd, make cameo appearances. The main cast is solid, and the accessory cast was incredibly funny too.  To me, something seemed off, though, about the chemistry between McCarthy and Bell. Both are wonderfully talented and funny, but their relationship seemed stiff. More so for Bell, who plays a very reserved, motherly character. McCarthy shines in her own offhanded element, part of that coming I assume from her work writing the script with her husband and the director of the film, Falcone. The two have worked together previously, including the hilarious scenes with Air Marshall Jon in Bridesmaids.  But the character is also already familiar to McCarthy as it came from her former stand-up routines.  The dialogue at times seemed predictable and trite, but at 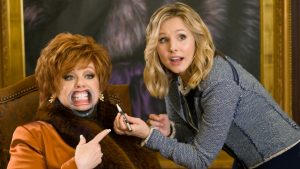 other times was downright rolling on the floor laughing my ass off.  McCarthy’s ability to turn a phrase is undeniable, but sometimes it was the phrase that needed work.

The most important part of the film, in my opinion, is McCarthy’s character’s ruthlessness. Okay, yeah, that’s not necessarily a good trait and certainly not one you want to impact on your youth.  But, in some instances, it is a good idea to fight for yourself and what you deserve which is what McCarthy’s character does the whole film. When Claire finally stands up and demands the raise she is owed, Michelle is pleased. She has been waiting for Claire to stand up for herself all along because you don’t just get things handed to you when you deserve them, sometimes you have to ask or demand it. And in respect to the girl’s club, this is a fairly decent lesson also. As a society, we don’t want to raise children who are obsessed with money and getting to the top.  What we want is to raise youth that will work hard but demand their fair share for the work they do.  I was in a similar group when I was younger and I sold a crap-ton of cookies.  You know what I got from it?  I think a jump-rope that was worth the cost of one box of cookies that I probably could have bought myself.  Where does the money go?  It doesn’t go back to the girls directly.  Maybe in the form of social programs, but that doesn’t mean those programs necessarily reach them.  So whose pockets are getting lined?  Not the girls who are pounding the pavement selling cookies.  It isn’t going into a college fund for them.  Now a program like that, setting up a percentage per every box sold for each girl for a college fund?  Get me the sales sheet because I will buy all the cookies!!  And I understand that social programs like that build character and social skills, but not everyone in them comes out with a positive experience.  Because let’s face it, some kids are mean.  Speaking of mean, there is a pretty legitimate brawl scene that I bet was just hysterical to film.

In the end, it’s got that heart and charm that come from a movie meant to teach a lesson.  But it’s also got the sass, sarcasm, and swearing to make it more watchable.  If you’re in for the night with a bottle of a wine and want some laughs and maybe some tears, pop this in and give it a watch.

The big question for this boss is “is she really all that?” Find out when The Boss debuts Saturday, January 21 at 8:00pm on HBO and find out about more of the latest movies on the Movie Schedule page.