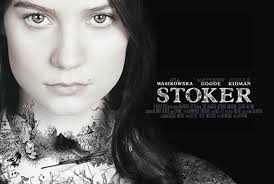 This is not a film about Bram Stoker, the making of Dracula or anything else vampirical. This is a film about grief, betrayal and sorrow as the Stoker family’s only child, India, comes to terms with the death of her father amidst the final years of her adolescence.

Park Chan-Wook, Director of Old Boy, brings us a twisted tale brought to life by an artistic vision and excellent performances. Mia Wasikowska does brilliantly to inject the perfect shot of darkness while simultaneously emulating purity and innocence through the character of India. We start the film on her eighteenth birthday as she is hunting for a pair of sensible black and white shoes from her father, a tradition that has been going on all her life. While hunting she learns that her father has been killed in a car accident and the perfectly sewn seams of her life rapidly start to be picked apart. At the funeral, her estranged uncle Charlie (Matthew Goode) turns up unannounced and imposes himself on the family. He prays on India’s fragile mother, Evelyn (Nicole Kidman) who is only too quick to be swept up by his charms as she teaches him the piano, cooks him dinner and eventually succumbs to his mystery and magic. India can’t help but ask questions, who is he? Why has she never heard of him before? Most importantly, what does he want? She becomes obsessed and infatuated with him, developing feelings she has never had before. She becomes confused by him and soon discovers the answers to her questions are a lot more twisted and sinister than she could have possibly imagined. 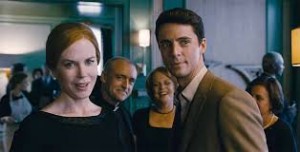 India is not the average eighteen year old girl, she dresses like a Victorian child, reads books about mourning and death and barely knows how to be happy since the passing of her father. She is like a more serious, grown up Wednesday Addams. India is in the height of her adolescence, at eighteen years old she is becoming a woman and experiencing feelings and emotions that are new and confusing to her. Her absent mother makes it difficult for her to come to terms with the changes she is going through as she faces them alone and ultimately makes some life threatening decisions. One night, as she spies through the window of the dining room she watches as Charlie kisses and caresses her mother, gently placing his hand under her breast. Feeling betrayed and bewildered, she runs off to find a local hang out frequented by some boys from her school. She finds Whip, the only boy at her school who has ever been nice to her and leads him into the park. He starts to kiss her and she forces his hand to hold her breast the way she had seen Charlie doing so to her Mother. Whip becomes overzealous and starts to force himself upon her, pushing her to the ground and trying to rape her. Charlie appears through the mist and saves India by snapping the neck of the boy with her father’s belt. The two proceed to bury Whip in the earth and retreat home, not uttering a word between them. India arrives home, muddy, shocked and devastated and has a hot shower. She masturbates as she thinks ab 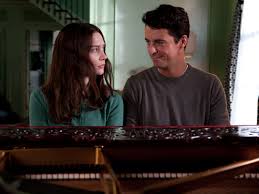 out Charlie, the murder, the snapping neck, the burying of the body and the fear she felt when she thought she was going to be raped.

The innocence of India becomes jilted as her relationship with Charlie develops. While nothing physical ever happens, the connection is obvious. Her mind and his are almost as one, she understand him, fears him and desires him all at the same time. The truth weedles its way out through the cracks in Charlie’s surface and India is faced with some horrifying decisions that could ultimately change her life forever. Will she succumb to the dark and sinister world Charlie has invited her in to, or will she reconnect with the happy girl she once was when her father was alive?

Stoker is a refreshing jaunt into the coming of age movie that has been poisoned and twisted into something darker and more terrifying than anyone’s adolescence should be. Wasikowska is perfect as India, she is able to evoke fear by simply a look and subtly alludes to her inner turmoil as she faces up to losing her father and moving on with her life. Her character is reminiscent of Sissy Spacek as Carrie; a slight, pale girl with drab hair and a sad smile who can seem pure and evil at the same time. She is taunted for being different by the children at school and ultimately pushed to succumb to her own wickedness. 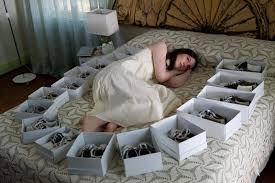 Chan-Wook’s beautiful direction and artistic style aids the film in is memorability and fuels the mystery and intensity of the story, which isn’t particularly in depth or complicated. It’s a thriller that has been given a make-over to disguise it as something else – not at all a negative point as it is this that sucks you in. Nicole Kidman is forgettable as Evelyn and Dermot Mulroney and Jacki Weaver are underused considering their ability. It is Wasikowska and Goode who carry the film with their powerful performances.

Surprising, provocative and seductively sinister Stoker is a refreshing glimpse in to the female psyche and addresses the concept of mental health without being too heavily invested in the emotional perspective.