On the surface it looks like Kingsman: The Secret Service is a knockoff of James Bond. In a certain sense that’s true, because any British secret agent jetting all over the world to fight a megalomaniac with a plan to change to the world to his image bears a striking resemblance to the structure of a Bond movie. However, the movie doesn’t hold back on goofiness for the sake of grim reality, or humor to be taken seriously. It knows its theme and trusts its audience well enough to catch on without recycling ideas from other recent movies that did it better. If the mediocre Spectre tells us anything it’s that Kingsman does Bond’s job better than Bond himself.

Kingsman is the story of Eggsy, a young kid stuck on the wrong side of the tracks trying to make the best of a bad situation. But when he gets in a little too deep, he calls in a favor from an old friend of his Father. An old friend who’s looking to recruit Eggsy for a life-changing position; spy. It turns out Eggsy’s Father was a secret agent, and now he has the chance to follow in his footsteps. He can become a Kingsman, and protect the world from Valentine, a man with the insane plan of wip 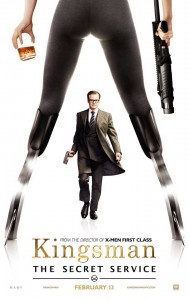 ing out the majority of humanity to save the world from climate change (in his words, Global Warming is a fever intended to kill the virus, meaning us).

Since its most direct influence is James Bond, Kingsman follows nearly every trope of the old films, from the crazy plan to destroy the world to the henchman with a bizarre augmentation that makes them even more deadly, much like Jaws (here it’s Gazelle, Valentine’s assistant with swords for prosthetic legs). You’ve got the
gentlemen spies, always wearing tailored suits and carrying around umbrellas filled with various gadgetry. And skills above and beyond that of the most well trained soldier executed with grace and nonchalance.

As a satire, Kingsman purports to be above the tired tropes and formulas of summer blockbusters, but the movie is mired in the same clichés it derides. It’s a hero’s journey of a boy being taken from a go nowhere life into a secret society that can teach him to live up to the potential he’s known he always had. He meets a girl, and gets promoted to the big leagues when the bad guy makes his move to take over/destroy the world. There’s action, adventure, and set pieces just as big and flashy as any other movie that would come out in the early and later months of the summer. So what makes this movie different from them?

There’s both sincerity and cynicism that meshes in a way that would be divisive to most audiences, only seeing one or the other by the time the movie ends. Colin Firth taking Eggsy into his office, lined with newspaper headlines of events that occurred instead of the terrorists attacks he foiled is a glimpse into the real purpose and sacrifices he makes being a Kingsman, never being recognized for saving the world numerous times. Then, the movie will turn around and make a sex joke that many found to be crass and out of place.

The most controversial scene is likely when Colin Firth enters into the church of a hate-spewing minister (like the Westboro Baptists turned up to eleven) and gets caught in the middle of a frenzy as everyone inside is mind-controlled to kill one another. On the surface it’s a simple jab at the church’s real life counterparts, wish-fulfillment on the part of those who would otherwise turn the other cheek. Really, that’s all it is beneath the surface as well. But if you dig deep, really far down, you can find out why this scene was included in the movie. The way the story is set up, with a tech billionaire rounding up the wealthy, famous, and powerful to save them from his doomsday device which sets the poorer, average people of the world against one another, it makes perfect sense. There is a literal war going on between the rich and the poor, but the rich are staying far away from the fight, making the poor fight amongst themselves. This scene, wherein Colin Firth going on a rampage through a bunch of people that most of us love to hate illustrates the point before the even bigger conclusion jams the message in our face.

As an audience, we are shown that we embrace the fact that we are focused on the fights between each other than the fights against the people really oppressing us. Whether or not you agree politically with the idea that corporations, celebrities, and the aristocracy don’t have our best interests at heart, the movie slams the idea home that we are invested in our own unimportant squabbles more than the important fights we should be having with those that control the cultural, economic, and political progress of the world.

In all, the movie is a lot of fun. The actors have great chemistry, the action is a lot of fun, and set pieces are colorful and inventive. I’d say that you should give this movie a watch. That is, if you can group your family around the television on the Saturday of Thanksgiving weekend.

Kingsman: The Secret Service Premieres this Saturday, the 28th on HBO!