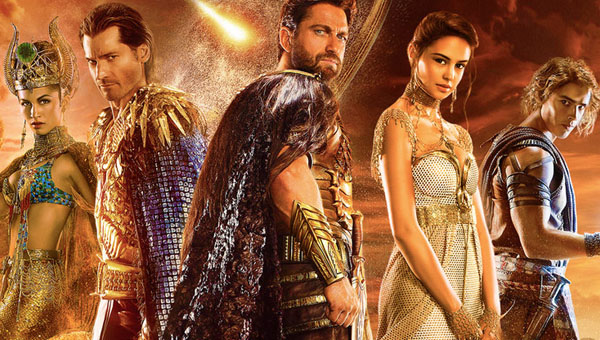 Lots of fancy looking folks are strutting their stuff in this movie. Kind of odd, though; usually when one thinks of a movie that has to do with Egyptians, you think of olive skinned or tall, dark and handsome people with exotic accents and breathtaking locales. That’s why it was a bit tough for me to sit through a movie that showcased a lot of white people portraying ancient Gods and Goddesses. The costumes are splashy and the sets are extravagant, to say the least.

In terms of plot, you have the age old brother versus brother (good versus evil) plight. Of course, one brother rules over mortals and Gods, while the other one rules over the dark, barren expanses. Wouldn’t you be a bit upset if that’s all you got to look after and dominate and then have to bow and scrape to a younger nephew? You can see Set’s dilemma. Gerard Butler portrays Set with a condescending swagger. But, he’s nice eye candy to look at, so from a female perspective, I’m okay with that. We also see Game of Thrones’ alum Nikolaj Coster-Waldau as the hero, Horus.

Horus is forced to fight against his uncle Set when Set murders Osiris in front of thousands of villagers during what was supposed to be a happy coronation ceremony. To add further insult to injury, Horus is blinded and his love Hathor has to beg and plead for his life, unfortunately becoming the humiliated and desolate mistress of Set. Not the greatest arrangement, but the things some people do for love, right? During this spectacle, we see a young man named Bek flee in the chaos. Bek was a villager who was seen stealing objects in the beginning of the film, while trying to impress his lady love, Zaya. What does this mere mortal have to do with the fate of Horus and what will his part to play in this movie? We soon find out, as Bek and Zaya become separated in the chaos and horror, once Set proclaims himself King and beats his nephew in a trial of combat.

The next time we meet Bek, he is building monuments as a slave and his lady love Zaya is now the property of some pompous architect names Urshu. How convenient that Bek just happens to be a very skilled thief. This could prove valuable, considering the eyes of Horus are locked in the treasure vault that belongs to Set. Of course, it’s not like Set is going to just let anyone go and steal his goods. Second, this guy wants to rule everything in his path. Yes, that level of power becomes self-destructive. Eventually Hathor gets away from him and runs into her true love, Horus and Bek. The trials and tribulations a God must go through in order to get his eyes back, to find out what his true destiny is and to try to restore order and balance to his world. Eventually, we all know and understand that Horus is going to have to go back and face off against his power hungry uncle, in order to restore justice (and perhaps extract some revenge) and of course, there will be setbacks, heartache and death before justice prevails. 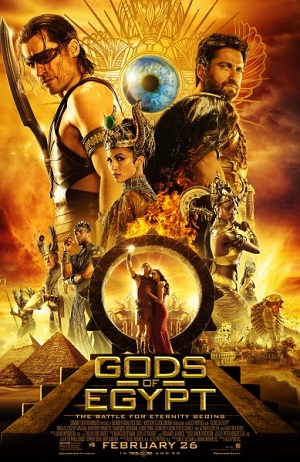 Watching this movie was kind of boring; everything was so sparkly and out of this world that it really didn’t do Egyptian mythology any justice. I get that there’s always going to be fascination with period piece movies, especially those ones that employ magic and legend, but I personally feel that this movie would have been better as an animated movie, the way Robert Zemeckis directed 2007’s motion capture film, Beowulf. I think if it had been like that, the plot may have been more believable and a good animated movie can always draw in an audience of all ages; unfortunately this movie was just too splashy and too white washed to be believable. There are lots of incredibly talented actors and actresses of ethnic descent and I am puzzled as to why we did not see an equitable representation on the screen, but then again, I’m not the casting director, the producer or director. I found myself looking out the window while the movie was playing. I found myself thinking of Beowulf. So, if you like a good sword and sandals epic type of movie, I would recommend Gladiator or Spartacus. I would keep Gods of Egypt up on the shelf, but that’s just me. You might go for this highly glossed and stylized stories full of deities and monsters, though. To each his own. It debuts Saturday, October 22 at 8:00pm on HBO.