The world is a dying waste. Ravaged by war, left nearly uninhabitable, with those who remain struggling to eke out a life for themselves beneath the heel of the elites who rule from on high. But first let’s talk about Alita: Battle Angel.

Who isn’t a sucker for some good cyberpunk? Give me a good Blade Runner, Akira, Altered Carbon. A world soaked with endless rain, neon lights blotting out the stars, synthesizers turned all the way up, technology outpacing humanity’s ability to cope with their disconnected place in the world and I feel right at home. It sends a shiver down my spine the way the artifice hangs so obviously, like there’s no sure footing beneath your feet and with one wrong step you’ll fall into oblivion. That shrinking feeling of insignificance against the almighty churning machine. There is no dirt, only concrete and silicon. 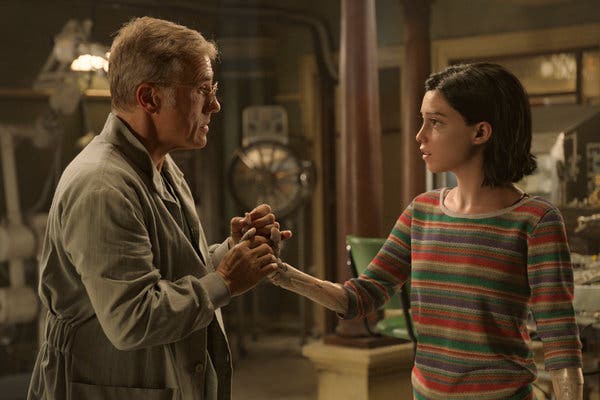 To tell the story from the start we need to begin at the end. In the far-flung future, the human civilizations on Mars have gone to war with the Earth, and while the Earth ultimately prevailed, the resulting nuclear oblivion has left the majority of the planet uninhabitable. It’s in the last city that Dyson Ido (Christoph Waltz), a doctor who specializes in repairing cybernetic augmentation finds the remains of a young female cyborg while scavenging for parts. The girl, Alita (Rosa Salazar), has no memory of who she was or where she’s from, but quickly discovers that there’s something about her past (and her character) that makes her a target for the powers that be in Iron City. There’s this delightful earnestness in Alita, this full-throated hope that shines through the bleakness of the world she’s been awoken into. And it’s by wielding that hope that she’s able to pursue the truth of who she is and what her purpose in this world will be.

Whether or not you like this movie depends entirely on if you’re into the aesthetic of the world and if you accept Alita as a character. Unlike some earlier examples of cyberpunk like Blade Runner, this movie doesn’t present the world as beyond hope. As we see everything through Alita’s eyes it’s all fresh and new and innocent. And with that innocence and earnestness, having Christoph Waltz walking around with a rocket-propelled sledgehammer talking about being a “hunter warrior” is kind of hard to take seriously when you first hear it. It feels almost like a fairy tale, if that’s even possible. Waltz has a modest, reserved affect that helps balance out Alita’s high energy but it’s entirely possible that before the end you may be into the world of Alita, but not Alita herself.

Still, though, there’s something to be said about Alita as a character searching for control of herself. As someone new to the world, everyone has an idea of who she is. Ido sees her as a surrogate daughter, the other hunter warriors see her as a little girl, and the men in charge see her as a threat. Without spoiling it, scenes between Ido and Alita about who he wants her to be and Alita’s defiance will definitely resonate with those who struggle to identify with the body they are given rather than the one they want. There are arguments to be made about the tactfulness of how it’s presented, but a character who literally finds herself and self-acceptance in a new body is an idea that doesn’t get a lot of screen time, let alone full arcs in major budget features.

To that end, every cyborg body is unique, from their look to their mannerisms. And the fights between them in this movie are out of this world gorgeous. The CGI has a bit of a cartoonish and over the top feel, but that simply lends to the overall aesthetic. That is, the fights look fake, but because everything looks kind of fake, it doesn’t distract or take you out of the moment. It’s similar to the feeling of watching Who Framed Roger Rabbit. If it’s the conceit of the story you can hardly say it feels out of place. The sport that everyone plays, Motorball, is a blend of NASCAR and roller derby, is fast and intense but despite the speed characters move at, nothing ever feels distorted or made my eyes ache to watch it. In fact, by the end I wanted more, which is the best way a movie can leave you.

Alita is a fun little reprieve from the world that can definitely help you charge your batteries for the revolution to come. It’s beautiful, sincere, and just generally a whole lot of fun to watch.

Alita: Battle Angel premieres Saturday, February 1st at 8pm on HBO! Check out the trailer below!