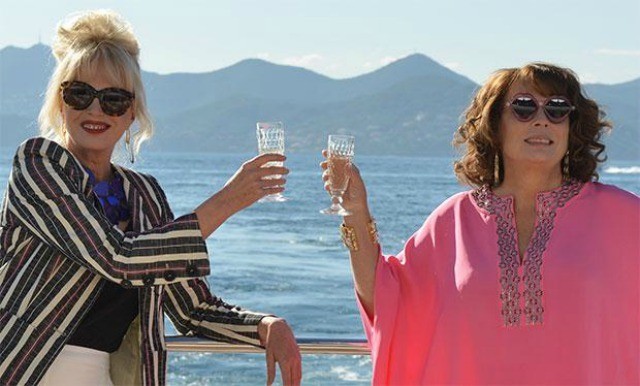 Absolutely Fabulous: The Movie was released in 2016 and is a continuation of a popular British TV series which dominated the airwaves in the 1990’s and early 2000’s. The series followed dysfunctional best friends Edina Monsoon (Jennifer Saunders) and Patsy Stone (Joanna Lumley), who both have considerable money under their belts, as they saunter and smoke their way through their more mature years. Indulging in alcohol, cigarettes and recreational drugs, the flamboyant pair find themselves in a constant slew of trouble, often as a result of their childish and immature behavior. Saffron, Eddy’s daughter, is always the butt of their jokes in her frumpy brown jumpers and oversized glasses she is the polar opposite of her mother and is ready to offer a discerning “tut” of the tongue, roll of the eyes or cynical half-smile when things really do go bad. 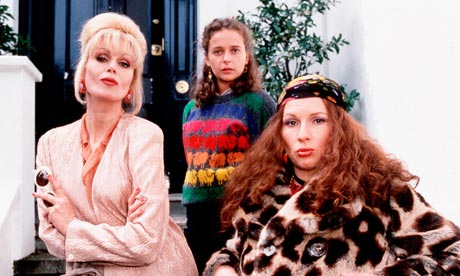 Patsy and Eddy are the most loveable rogues, they live in a fantasy land where bottles of Bollinger line their refrigerator, they are dripping in diamonds and pearls at all times and their outlandish behavior is just an extension of their eccentric and over the top personalities. The program takes place in Eddy’s luxury London home and usually in her basement renovation where she and Patsy, along with her daughter Saffy and mother are frequented by a myriad of celebrity guests, most specifically Lulu, Emma Bunton, Twiggy, Celia Imrie and Kathy Burke. 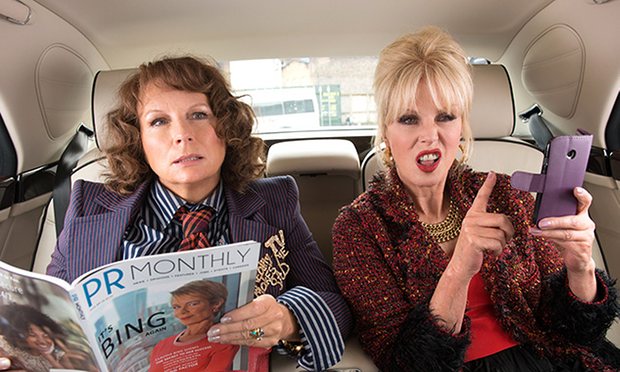 In Absolutely Fabulous: The Movie, Eddy and Patsy are back and looking as fabulous as ever. Our two favorite women are thrown into the spotlight after they accidentally knock Kate Moss off a balcony at a magazine party and she is missing, feared dead. The spotlight is unwanted and unflattering so Eddy and Patsy run away to Cannes in France where they dress Patsy as a man and trick the richest woman in the world, who is also pretty old, into marrying her. With French and English law enforcement on their toes as well as old friends and a disgruntled daughter, the hunt to bring the two women home becomes outrageous, outlandish and downright silly. But that’s what we Brits love about them!

Some might say that the antics of Eddy and Patsy are nothing new and there is something of ‘flogging a dead horse’ about the film. The jokes and celebrity guests are all the same and the film just rehashes original material from ten years ago and palms it off as new. While that may be the case, I don’t think it is right to use it as a negative. These two characters are iconic in British TV and they are both still young enough and willing enough to keep Eddy and Patsy alive. If people were expecting them to have grown up and settled down then the film would have been more like a Richard Curtis special than the edgy comedy it used to be. Ab Fab always pushed boundaries, took risks and became memorable for it. The film was silly, it was so so silly, but I wouldn’t have expected anything else! It isn’t what it used to be, that’s for sure, but mostly because things have changed so much since we last saw them. Not just in the world that they live in, but the world we live in. The original series was ground-breaking at the time as these two female characters were the sole source of comedy and the kind of nonsense they would get up to was bold at the time.

British TV was dominated by male heavy casts, shows like Men Behaving Badly, Bottom and The Young Ones were extremely popular and in 1990, when Absolutely Fabulous was first imagined as part of a French and Saunders sketch show, women were only being represented as wives and girlfriends. Ab Fab comes along a smashes the stereotype and made women hilarious without a male component and allowed women to be completely flawed characters. The film isn’t anything new, it is more of an homage to something old. It allowed us to see beloved characters again, see how they are doing, what they are getting up to and who they are wearing. We want Patsy and Eddy to be happy and if that means checking in every few years with a movie then I am happy to do that. The film rounded off some loose strings from the end of the final season and allowed us to get a glimpse into life for Eddy and Patsy as they embark on the next chapter in their lives.

It’s a riot from start to finish and hardcore Ab Fab fans are sure to love it!