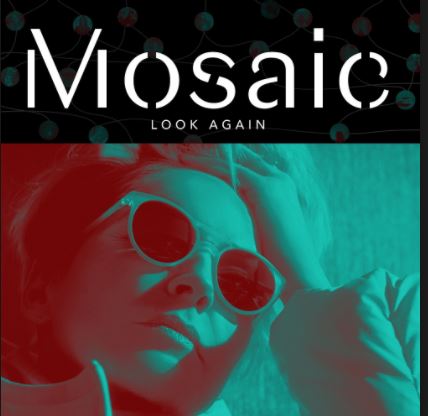 Toted as an interactive story with an accompanying app, I wasn’t sure what to expect from HBO on this one. I decided not to use the app because I was more than 100% certain that I would get distracted and not be able to absorb any of what I was watching. And I was also fairly certain that as a Steven Soderbergh piece of viewing, I would want to be paying attention to what I was watching.

Alright, where to start. Casting, plot, setting, I mean it is all aces. But let’s start with a plot. Basically, it is who murdered Oliva Lake. More specifically, we open with Devin Ratray (The Tick) as Nate Henry telling his friend Joel, played by Garrett Hedlund (Mudbound), that the police have discovered that Joel is involved in possibly several murders. His friend will be responsible for writing a warrant and arresting Joel. Quickly we flash back four years and join the wealthy elite gathered in Summit, Utah to praise the art project called ‘Mosaic.’ It is the latest project from a long-struggling artist, Sharon Stone (The Disaster Artist), named Olivia Lake. She now helps children in the area learn and create art because she reached her peak back with ‘Mosaic’ and could never create anything of that caliber again. Residuals seemed to keep her going, but owning a significant chunk of land means expensive upkeep.  She also occasionally allows artists to live there and work on their art under her tutelage.  Enter Joel, the young artist working as a bartender trying to find a way to promote his art.  She intends to use him for labor on her land and possibly sex him up if she’s lonely.  The surprise is though, he’s not single. Too bad for you, Olivia.

Not long after someone begins working against her in an attempt to get her land. Which originally really confused me as they were talking chemicals or whatever minerals are in the land.  But I was also a little loopy on back meds so I can’t really tell you anything definitively in that regard, only that I was confused a lot at first.  Anyway, enter the conman, Eric Neill (Frederick Weller of Cinemax’s Banshee) who sweeps Olivia off her feet and gives her what she’s been missing all along: love.  He fills the void of loneliness.  But as they grow closer, his dedication to the scam waivers.  Would he give it all up for love and how do you trust a person to be telling the truth if they are a professional liar? Or, you could be set to wonder where does the scam end and true feelings begin?

Stone leads the cast with her incredible experience and poise. Weller and Hedlund bring different energies to the story and it balances well with Stone. Ratray and Paul Reubens (yes, PeeWee Herman), as Stone’s friend JC, are great background characters that bring the heart and humor. The scenery is undoubtedly gorgeous. I’ve never had any indication of ever wanting to travel to Utah. But now I am absolutely obsessed with the idea of going out there. It looks absolutely breathtaking.

There was one really interesting moment to me in this introductory episode. Olivia wants to flirt with Joel and her friend JC says that the best way to sell the truth is to tell it. There is another saying that telling the truth is best because it is easier to remember than a lie. Well when Olivia and Eric are getting to know each other, he tells a story about a play he did as a child called “The Impersonator,” where he did impressions of celebrities and kids at school. He also says that his father was a con artist. So is the con artist possibly telling the truth because it is easier to sell and easier to remember? Or is he lying for the sake of the con?  Also that living the life of a con man means altering your personality to fit a situation, much like a child doing impressions of other people. That maybe he doesn’t let his own personality through?

So now that you are caught with some of the players, take in the trailer and let’s see where this story takes us.

Watch Mosaic now on HBO On Demand and on HBONow/Go.