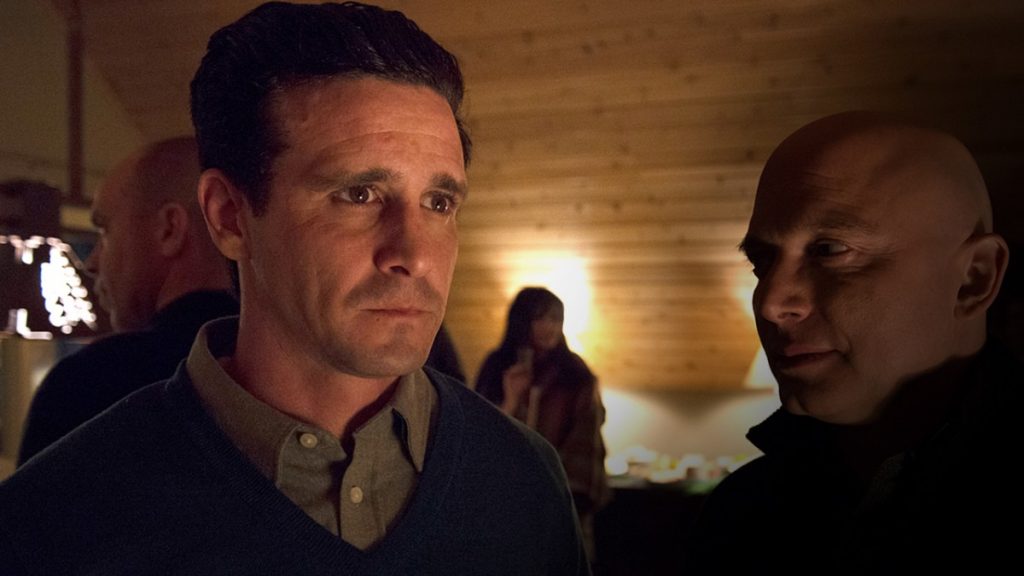 Two things here: I never liked Tom Davis (played by Michael Cerveris) or Michael O’Connor (played by James Ransone). In fact, we haven’t even mentioned these characters until now, which is our slight. From the beginning, Tom was shady and vague and Michael, well, something seemed odd about him. When he was doing that very painful introduction at the artsy party fundraiser for Olivia, his posture, his demeanor – something didn’t sit well with me. Maybe it’s because I’ve seen and read an awful lot of movies and books and when some characters have a lot of money, they become greedy. They want more. But when does more become too much? 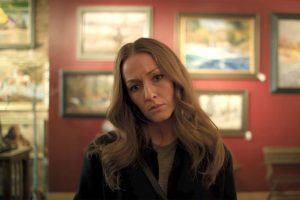 I have to give credit to Petra: she’s become a bulldog and will go to great lengths to get whatever information she needs to get Eric’s case reopened and get him out of jail. Listening to phone messages, speaking with JC, Olivia’s best friend, and consulting with university personnel about the geological makeup (beryllium) of the terrain in Summit Petra has opened up a huge can of worms. Most people would become discouraged and throw in the towel. Not Petra, she just keeps on going and in her quest to find the truth about who murdered Olivia, she uncovers some unsettling facts about Joel, Michael, Tom, Alan and not surprisingly, Olivia herself. Allan and Olivia dated a while ago but what was a passing thing for Olivia was probably something more meaningful for Alan. Olivia, in my opinion, used men and dropped them when the mood struck or when the bloom was off the rose.

In Petra’s quest to get closer to the truth, she ends up meeting and having an unpleasant discussion with Alan. Allan really puts her in her place and makes her feel about two inches tall. How nice that Alan arranges a ‘meeting’ with Tom. The real person who knows the in’s and outs of what’s going on is Tom: his façade never cracks when speaking to Petra about Eric. Oh yeah, remember Cliff Jones, the go-between who was in on the scam involving Eric, Tom, Michael and the attempt to get Olivia’s property? Well, there is no Cliff Jones. That puts Petra back into the game, linking names, locations and motives. Her eventually speaking with former employees 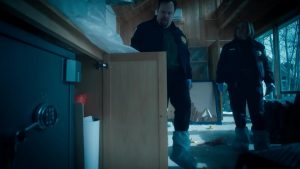 of Olivia’s provides crucial information on top of everything else that could help Joel out.

But here’s the fly in the ointment! Even though there’s information that could help Joel out, it’s come too late. Remember what I said about Tom and Michael being shady? Remember that they have money? When you have money, you have a lot more power to wield. You have more resources at your disposal. Maybe some of those resources aren’t completely legal. One final meeting between Petra, Tom and surprise! – Michael (who was supposedly away in the Caribbean) reveals the wealth of minerals tied up in certain tracts of land in Summit. Oh yeah, Olivia’s property was loaded with the stuff. Tom never flinches at any and all of the accusations and hard truths that Petra hurls his way. It doesn’t matter. Those with money have power. Simple as that. There were a lot of losers in this scenario. Eric – who was a patsy in a scam, went to jail for a crime he didn’t commit and had his personal/professional reputation being ruined. Petra, who told the police where her brother was before he was arrested, straining her relationship with Eric. Olivia, a lonely, woman searching for happiness, helping children reach their artistic potential through art programs but tragically, ended up being killed. Joel, for having alcohol addictions and blackouts, possible mental illness and ends up confessing to the murder. A legal system that continues to serve the wealthy and even if the truth is on your side, without money, you don’t get closure or satisfaction;  just bad memories and painful scars. Justice really is blind.

And with that, the Mosaic was pieced together and Steven Soderbergh’s story was told. For a different perspective, you still can find the app and/or watch this linear version on HBONow/Go.