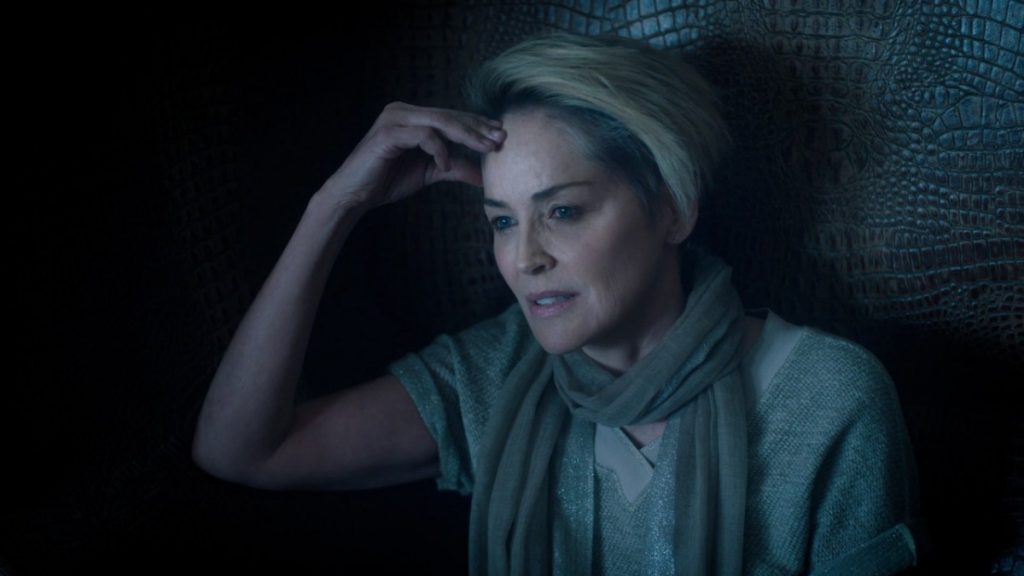 We continue our look at Mosaic.

In the second episode, we see that Olivia and Eric have settled into domestic bliss together.  She’s very happy and her friends can see it.  But you have to wonder if it is all a ploy or if Eric is giving up the game and doing this for real. He even pops the question. Which was exactly what he did in his last scam. So what’s his skin in the game? Turns out, nothing anymore. He returns the remaining part of his advance and plans on coming clean to Olivia. Which he plans to do during the holiday party at their house. So, I know you want to come clean with her and you 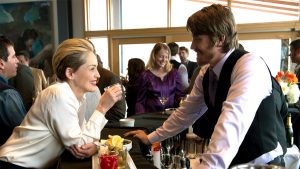 obviously want to do it fast because otherwise those who bought you could contact her and sell you out which you don’t want. I get that. But in the middle of a holiday party? Not a good idea dude.

But before he can even get to that, Olivia decides to come clean on her own. She decided to tell Joel that she is going to sell the land as an investment for her new project to expand Mosaic.  But she also tells him that he’s not talented enough to get anywhere. She tells him that she wanted him around because he’s handsome and makes her feel less lonely. She also tells him that he owes her rent. Which he understood that his work around the land would be his exchange, which is what I thought too. Kinda shady move there, Olivia. Especially given how you treated him. Joel leaves, clearly pissed.  He ends up drinking heavily which isn’t good because it appears he has quite an anger issue when he’s drunk.  So they are definitely laying the groundwork for his possible commission of the crime.

We come back to Olivia with Eric and he tells her the truth. She is obviously pissed. I mean, how do you come back from that? How could a person ever believe that what you are saying is the truth? You lie for a living, Eric. How could she ever know what you say is real? But what we see soon after is a crime scene and missing body. Turns out Eric is in custody. He says he didn’t know anything.  In fact, he says he didn’t even know she was dead until he was picked up and taken into custody. But he’s a conman, so it is really unlikely the cops are going to put much stock into his words. And I gotta say, the whole true crime tv show segment was really clever. Those shows being so popular and high profile crimes being most likely to be adapted, it fit perfectly. Plus it was nice to shift away from the tension of the murder.  You can’t deny that HBO knows how to bring the heat when it comes to television. This all played out so neatly. Except for whodunit, of course. 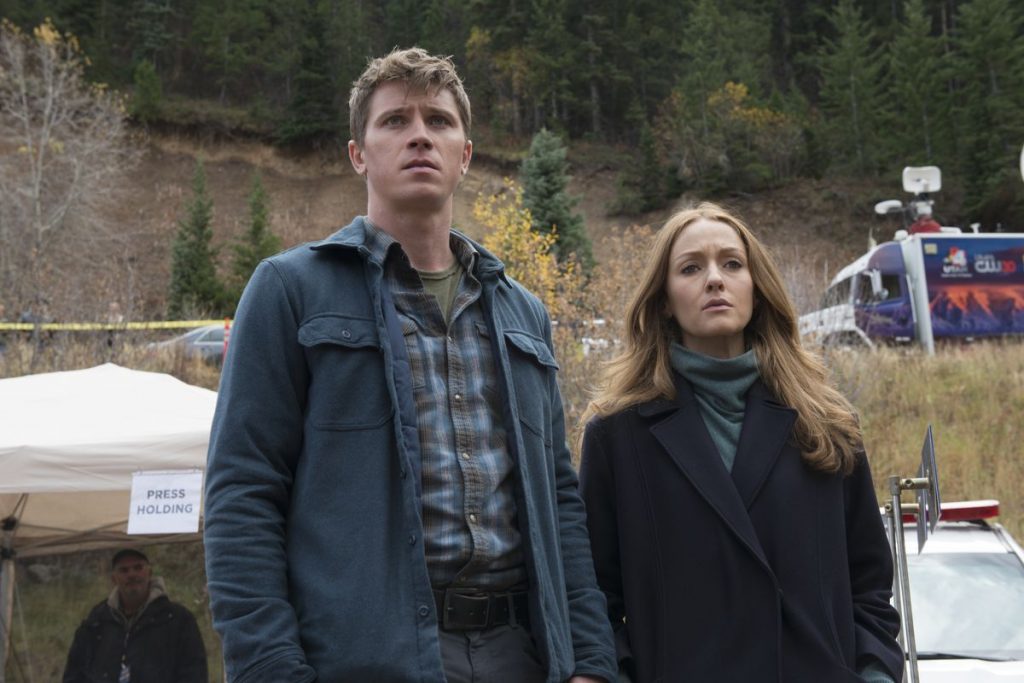 To me, the star of this episode is Jennifer Ferrin (Cinemax’s The Knick) who portrays Petra Neill. I’m going to throw that out there early and back it up as we go. As we learn early on, Petra was responsible for Eric being arrested for Olivia’s murder, or rather suspected murder as a body was never found. Eric subsequently makes a plea deal while ultimately maintaining his innocence.  You can imagine that guilt wearing on you when you see what a toll prison has made on her brother and yet he still maintains his innocence.  I would want to make that right.

After accessing Nate (Devin Ratray) the cop’s old case notes, she gets fresh on the trail of trying to clear her brother. It doesn’t take her long to realize that comments from Joel (Garrett Hedlund) and his friend Frank (Jeremy Bobb also from The Knick ) seem odd.  When challenging Nate on why he didn’t suspect his friends, he brings up ‘Zebra-itis.’  It’s a concept familiar to many in the criminal justice and medical worlds. If you hear hoofbeats, think horses. Not zebras. In the context of the situation, what is the most logical answer?  Rule out the obvious before 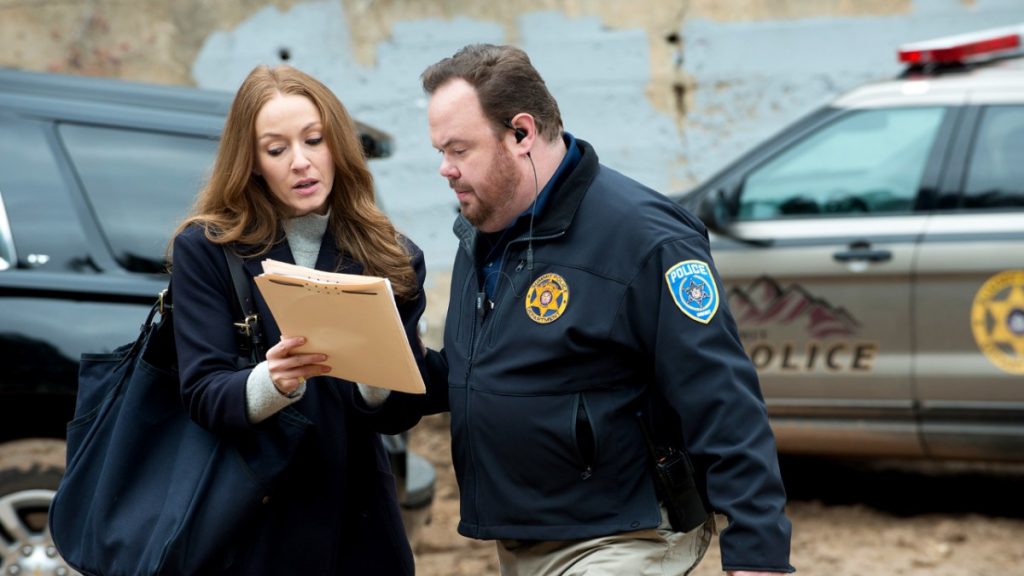 you assume the exotic or unusual. In the case of Olivia’s disappearance/murder maybe, she was last heard in an argument with Eric. They were overheard fighting where the blood was found. He fled the scene. It adds up. He thinks she’s looking for zebras. When really, she just might be finding horses. More on Nate and zebras later.

We pick back up with Petra as she heads to Florida to convince Joel to come back to Summit and help her exonerate her brother. Throwing back to the very beginning, we have to wonder if Joel is literally being asked to find himself. But I don’t think so. I think Joel is innocent actually. My theory is that Olivia is actually still alive and that she cut off her own hand. I’m probably ridiculously wrong, but that’s how I would write it. In any case, Joel comes back and I think soon things are quick to unravel for him. Nate asks Frank to talk to Joel and report back if he asks Frank to continue lying. So it is possible that even Nate is now considering the idea that his friend is somehow involved. More likely, he thinks it will be nothing and is doing it so Petra won’t get on his case about not doing it.

At the end of the episode, we get a better glimpse at who Petra is as a person. For starters, she’s smart. She knows art well enough to talk it up with the rich Summit folks and Olivia. Clearly more than a passing interest. Second, her relationship with Eric was strained. She clearly has some looks of disdain towards him at dinner. Probably wondering if he is in the middle of a con or not. Meanwhile, when she tries to talk about herself, he interrupts and not only doesn’t say something nice…he’s straight up dogging her for her lack of direction and makes it an absolute joke. 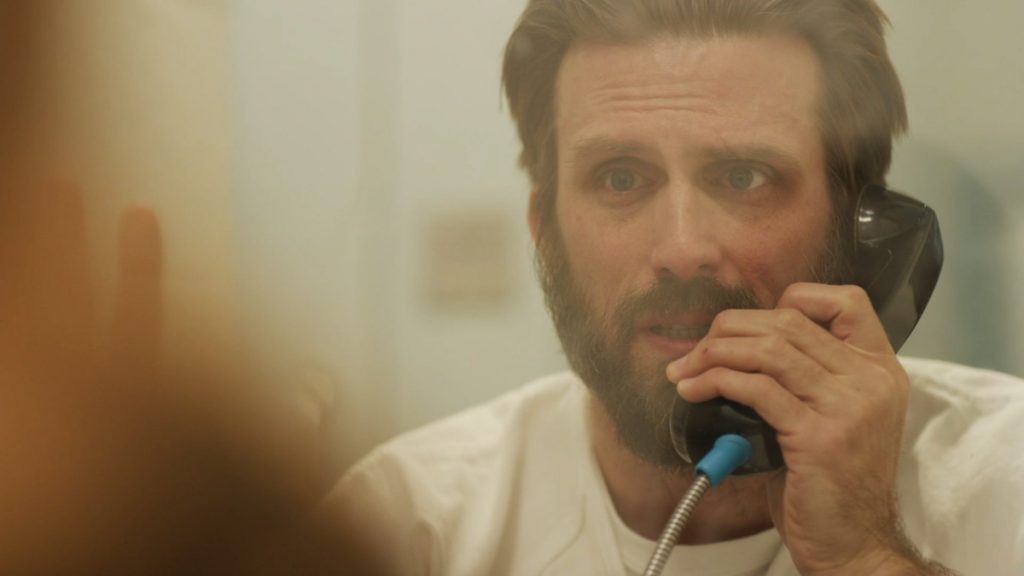 Seems like a pretty big turn around from strained relationship to searching for the real killer to exonerate him. Although they are siblings, I guess. Third, she didn’t get along with Olivia. While expressing a scientific view regarding art, Olivia exhibits truly what a bitch she is. She completely degrades her guest and acts holier than thou over art.  Just because she published a popular children’s book years ago doesn’t mean she rules the art world and decides what is important and what not. Get off your high horse, Olivia.  But then again, someone might have knocked her down themselves. So given that interaction and her relationship with her brother, why fight so hard to clear his name? What does she get from it?

So back to Nate and zebras. While he may be accusing Petra of looking for them, I think he might be going through some willful blindness of his own. I think Nate doesn’t want to think his friend is a murderer, or at least didn’t at first. Given the fact that Joel was also on the property that night and also had a fight with Olivia and also stormed off the property, he would have also been a high priority suspect. There is no way the cops would not have immediately tracked him down. Unless one detective willfully ignored that fact. In any case, we’ll find out soon. Stay tuned for more Mosaic.

Oh, and don’t forget it is also an interactive app!