Update: When we dropped you the news of the passing of actor extraordinaire Michael Kenneth Williams, we told you it would only be a matter of time before HBO offered a tribute. HBO has officially done so; we offer that video tribute here. Take it in and acknowledge the talent lost.

HBO states – Montrose Freeman. Freddy Knight. Jack Gee. Chalky White. Ray Ray. Omar Little. With us, Michael Kenneth Williams shared these characters. And with these characters, he shared himself — a gift we treasure today and always.

Some movie stints include Assassin’s Creed, Ghostbusters, Motherless Brooklyn, Inherent Vice, Kill The Messenger and 12 Years A Slave. Two movies starring Williams, yet released, are Surrounded by Anthony Mandler about the exploits of a former Buffalo Soldier and 892, about a distressed war veteran directed Abi Damaris Corbin.

Actor Michael K. Williams was found deceased in his Brooklyn, NYC home on Monday, September 06, 2021. A representative for the family stated, “It is with deep sorrow that the family announces the passing of Emmy nominated actor Michael Kenneth Williams. They ask for your privacy while grieving this insurmountable loss.” The family did not provide the cause of death.

The IMDB reminds us that –

Emmy nominated actor and producer, Michael Kenneth Williams is one of this generation’s most respected and acclaimed talents. By bringing complicated and charismatic characters to life-often with surprising tenderness-Williams has established himself as a gifted and versatile performer with a unique ability to mesmerize audiences with his stunning character portrayals.

Now, I know if you have watched HBO at all you have seen the work of this man you know he was all in. As we reflect on those roles, we note that his talents will be missed.

THE SOPRANOS – Season 3 (2001), Episode 13 “Army of One” in which Jackie Aprile Jr. is wacked; AJ Soprano is threatened with military school and Adriana La Cerva is being watched closely. Williams played the small role of Ray Ray, who worked for Joe Pantoliano’s Ralph Cifaretto.

THE WIRE – (2002-2008)  – He was the one & only Omar Little (pictured) in this gritty look at the Baltimore drug scene from David Simon and is heralded as one of the HBO’s and TV’s best. He appeared in fifty-one episodes. The IMDB states –

The wit and humor that Williams brought to Omar, the whistle-happy, profanity-averse, drug dealer-robbing stickup man, earned him high praise and made Omar one of television’s most memorable characters. 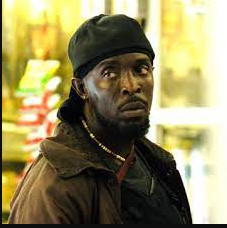 HBO Films: LACKAWANNA BLUES (2005) – a boy grows up surrounded by rhythm and blues in a Lackawanna, New York boarding house in the 1950-60s. Williams played Jimmy, a resident in the house and boyfriend to Macy Gray’s Pauline.

BOARDWALK EMPIRE – 2010-2014 – He had another solid character in this one as Chalky White (pictured, below). He was a 1920s bootlegger who always dressed his best and the mayor of Atlantic City’s African-American community. He is credited with fifty-six episodes of the Terence Winter masterpiece. 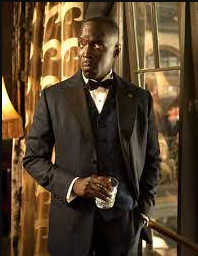 HBO Films: BESSIE – 2015 – He received his first Emmy nomination for Outstanding Supporting Actor in a Limited Series or a Movie for his role as Jack Gee in the story of legendary blues performer Bessie Smith (Queen Latifah). Gee was a security guard who had a tumultuous relationship with Bessie even though he was her first husband and manager.

HBO Miniseries: THE NIGHT OF (2016) – He played in six out of eight episodes opposite Riz Ahmed as Freddy Knight, a Rikers Island prisoner. Knight has Ahmed’s Naz under his protection while Naz is awaiting prosecution. Knight even goes as far as smuggling in a cell phone for Naz. He received his second nomination for Outstanding Supporting Actor in a Limited Series for this portrayal.

VICE Special Report: “Raised in the System” 2018 – VICE returned for its sixth season with an extended special season premiere produced by and featuring Williams as he embarked on a personal journey to expose the root of the American mass incarceration crisis: the juvenile justice system. The special offered a frank and unflinching look at those who got caught up in the system.

LOVECRAFT COUNTRY (2020) He was Montrose Freeman in ten episodes. The story follows Atticus Freeman as he joins up with his friend Letitia and his Uncle George to embark on a road trip across 1950s Jim Crow America in search of Williams’ character, his missing father. 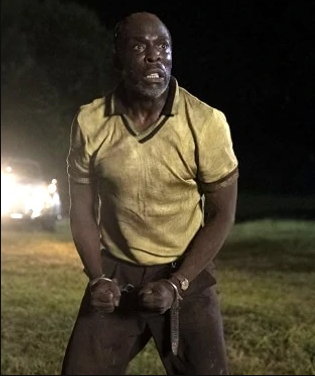 He was an actor in a number of other works as well that are detailed at IMDB but we cannot forget his classic, iconic turns as Omar Little and Chalky White and his other great roles for HBO. The network remarked – “We are devastated to learn of the passing of Michael Kenneth Williams, a member of the HBO family for more than 20 years. While the world is aware of his immense talents as an artist, we knew Michael as a dear friend who was beloved by all who had the privilege to work with him. We send our deepest condolences to his family for this immeasurable loss.”

There is no doubt once HBO gets back to the offices post-holiday an In Memoriam clip will be generated and we will add it here once it does. For now, here is Williams himself looking back on some of his roles.