It is a competitive market out there but we just didn’t think this would happen! We have been waiting a long time for the companion series that began with BAND OF BROTHERS and THE PACIFIC to come to fruition. We went from the title of THE MIGHTY EIGHTH to the final name MASTERS OF THE AIR and knew that a screenplay was being crafted. We eagerly awaited the arrival of the Playtone miniseries to complete its WWII saga —and it will happen, just not for HBO! And we are crushed!

Steven Spielberg’s Amblin Television and Tom Hanks and Gary Goetzman’s Playtone have made a deal with Apple for an event limited series based on the Donald L. Miller book “Masters of the Air: America’s Bomber Boys Who Fought the Air War Against Nazi Germany.”  The book tells the story of the American bomber boys in WWII who brought the war to Hitler’s doorstep. It becomes the first series greenlit with Apple serving as the studio as the company is joining major streamers like Netflix and Amazon, which also produce and own content. The miniseries will be more than eight hours in length, and that it will cost well north of $200 million to produce. 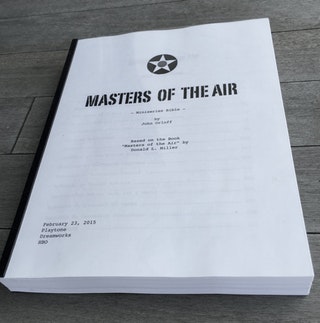 It is reported that HBO ultimately left the historical WWII event miniseries go. That is news that this site has never heard. HBO got tired of waiting or was this just a poor decision made since AT&T took over?  Or perhaps the work was just at a budget HBO could not afford? For whatever reason, the trilogy is left uncomplete at HBO, I guess if you are planning to pick up Apple+ when it arrives you are in luck.

One last comment or two before I let the news settle in – HBO best keep up with this new aggressive competition out there and regardless if its HBO or  HBOMax (I’m still a fan of the traditional format). Good luck MASTERS OF THE AIR, I’m sorry to hear that HBO will not be your home.