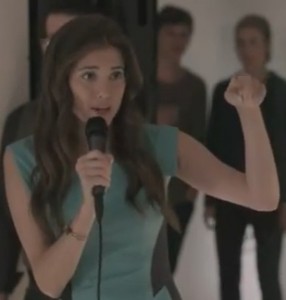 This Sunday HBO’s girls went there.  Whether you thought the episode was Dark, Graphic or even ‘Boundry Crossing‘ you’ll more than likely never forget some of the moments that Lena Dunham served up this week.  Some are even questioning the writer’s taste at this point (re: the three links above).

But darkness issues aside we wanted to highlight Marnie’s cover of the Kanye West single “Stronger”.  Some of you may love the character while others may hate her at the moment but we thought this cover was worth another listen so here it is:

We’re also interested in your thoughts on the latest episode. Did Adam rape Natalia in that scene? Was the use of.. ahem.. props justified? Are we just desensitized to this sort of thing now? Is there something wrong with our generation?

Leave us a comment below and for more go inside the episode with the cast and crew of Girls. Maybe they can explain the intensity of this Sunday’s offering:

Season 2 comes to a close this Sunday but we can already confirm that Season 3 is green and will probably premiere this year some time.

Here’s a preview for the finale: