There has been a lot of buzz lately about upcoming HBO projects. We still have a post detailing more of them forthcoming, but for now, we want to focus on a project we haven’t heard much about around here. It is HBO’s MADDADDAM project. It is a adaptation of a trilogy of books, as we previously reported, by Margaret Atwood.

We have been able to find some interview pieces with her as she talks about her post-apocalyptic trilogy and HBO’s take on it. Of course, she will not be able to reveal too much, but only speculate, because this outline and screenplay are in the early stages.

The first bit of information comes from Vulture and talks about how Atwood has noted the notoriety Sci-Fi & Fantasy receives nowadays. Back in her youth it was a fringe culture and certainly not large in the literary circles. Now there is Comic-Con and cosplay, etc. But, then she gets questions about the HBO project. 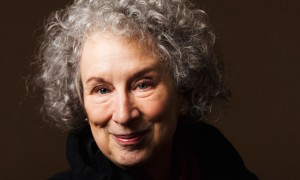 V:How do you see the series working in terms of storytelling, since so much of the plot of the books is told via flashbacks and memories?

MA:That remains to be seen, for both of us!

MA: Oh, no. I’m too old. [Laughs] I think for a series, you really need a team. I’ll wait until I’m invited. [Laughs] Anyway, they’re very smart, this whole group of people; very clever, and thoughtful. And I think they will do it justice. I think it’s appropriate that it’s a series, rather than trying to put it all in one movie, which would be very hard. I think my role as a consultant is to stay alive until they finish it, so I can actually see it! That’s good. I think that’s a goal to have. [Laughs]

Now the whole concept has some graphic content involved as well as some serious scientific and political content. It does not sound like an easy story to tackle. There are bio-engineered animals, hybrid humans and powerful corporations in a struggle for dominance. To help get the total feel for the works themselves and the heady and controversial concepts involved check out this fan-generated video accompanied by descriptions straight from Random House.

[box type=”bio”] “Oryx and Crake” is at once an unforgettable love story and a compelling vision of the future. Snowman, known as Jimmy before mankind was overwhelmed by a plague, is struggling to survive in a world where he may be the last human, and mourning the loss of his best friend, Crake, and the beautiful and elusive Oryx whom they both loved. In search of answers, Snowman embarks on a journey–with the help of the green-eyed Children of Crake–through the lush wilderness that was so recently a great city, until powerful corporations took mankind on an uncontrolled genetic engineering ride. Margaret Atwood projects us into a near future that is both all too familiar and beyond our imagining. [/box]

[box type=”bio”]“The Year Of The Flood” is the second book of the MaddAddam trilogy. In this one the long-feared waterless flood has occurred, altering Earth as we know it and obliterating most human life. Among the survivors are Ren, a young trapeze dancer locked inside the high-end sex club Scales and Tails, and Toby, who is barricaded inside a luxurious spa. Amid shadowy, corrupt ruling powers and new, gene-spliced life forms, Ren and Toby will have to decide on their next move, but they can’t stay locked away. [/box]

[box type=”bio”] “MaddAddam” is the third book in the series.  In this one the Waterless Flood pandemic has wiped out most of the population. Toby is part of a small band of survivors, along with the Children of Crake: the gentle, bioengineered quasi-human species who will inherit this new earth. As Toby explains their origins to the curious Crakers, her tales cohere into a luminous oral history that sets down humanity’s past—and points toward its future. Blending action, humor, romance, and an imagination at once dazzlingly inventive and grounded in a recognizable world, MaddAddam is vintage Atwood—a moving and dramatic conclusion to her epic work of speculative fiction.[/box]

One interesting element alone is the hybrid humans called Crakers who are naked throughout.  Atwood said at the Cheltenham Literature Festival that –

MA: “The question that is at the front of everybody’s mind – but that they’re sometimes afraid to ask – is ‘how are you going to do the naked people who turn blue?’ Do you use a bit of shrubbery?  So, I was actually talking to the team recently and I said, what are you going to do about that? “And they said, we are HBO, we’re going to do it straight. No shrubbery.”

Here is how Vulture broached the topic. 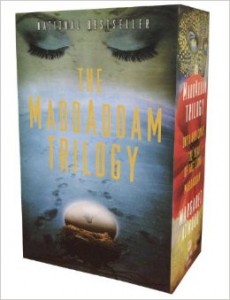 V: People might come to Comic-Con dressed as characters from MaddAddam — or possibly undressed, if they attend as Crakers.

MA: That is a question that has occurred to me as well! It would require quite a bit of chutzpah to do that! Are they going to use shrubs? Nude behind the shrub, and just let the top half stick out? Are they going to go Adam with the fig leaf? How daring will they be?

V: When they first announced the show, I immediately thought, how are they going to adapt the wagging blue penises?

MA:How indeed?! [Laughs] Yes, my very thought. Well, we’ll have to wait and see. I’ve not got any inside information on that.

V: At least they’re pretty comfortable with nudity on HBO.

MA: But blue nudity? We do not know! We don’t know! How much nudity? We just don’t know. [Laughs] And the wagging part, how will they … Well, that will be easy to simulate; perhaps with little motors? We’ll see how far they’re willing to go, and how much people are willing to put up with it! [Laughs]

This is all a heady, complicated and fascinating topic and HBO project that hopefully will make it on air at some point in the future. There will be plenty to explore between now and then. We leave you with Atwood’s comments regarding Darren Aronofsky spearheading the project. As told to those at the Literature Festival –

HBOWatch will keep you posted.